In Search of the Right Whale

Long before I began my research into the life history of narwhals, I spent time learning about what may be the rarest mammal in North America, the North Atlantic right whale, for my 2007 book about endangered species in New England.  Instead of having to travel to the Arctic to see my target species as I’ve done for the last few years, I was treated to great views of right whales somewhat nearby in Cape Cod Bay, thanks to the generosity of Stormy Mayo and the Provincetown Center for Coastal Studies.
This past weekend I returned to Provincetown with my wife Renay to see if we could get a look at the whales from shore, something she had never seen before despite repeated attempts.  Stormy told me that the whales had been congregating just offshore in the days leading up to the weekend, and he was right.  It only took us a few minutes to see our first right whale, and over the course of three days we saw more than a dozen whales cavorting within binocular-viewing of Race Point and even from our motel room window overlooking Provincetown harbor.
Right whales breed off the coast of Georgia and northern Florida and migrate north in time to arrive in the waters around Cape Cod in late winter and early spring to feed on the abundance of copepods – shrimp-like crustaceans smaller than a grain of rice – that are found in the area at this time of year.  It’s a treacherous trip for the whales, and the news media has reported several becoming entangled in fishing gear and others dying from ship strikes or unknown causes during the journey this year.  But thankfully many of the whales survived the trip and put on quite a show for us. 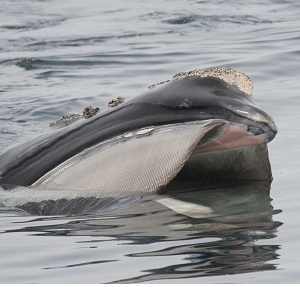 We watched as the whales cavorted in entertaining ways, like tail slapping, spy-hopping and my favorite behavior, skim-feeding – opening their mouths above the water’s surface and skimming food from the top of the water column.  While the whales were sometimes hard to see and even more difficult to count this weekend, from a distance it was easy to see the mist emitted from their blowholes as they surfaced for air and their frequent display of their flukes as they began a deep dive.  Right whales are impossible to misidentify, since they are the only large whale in the area that doesn’t have a dorsal fin, so we were confident of our sightings, though we did see one whale in the vicinity with a dorsal fin, which may have been a sei whale.
Nonetheless, it was wonderful weekend of marine mammal sightings, which included looks at a pod of harbor porpoises and a gray seal (as well as an unfortunate look at a dead Atlantic white-sided dolphin on the beach).  While there is no guarantee of seeing whales from shore, and there are no commercial whale-watching trips at this time of year, a winter weekend in Provincetown in search of our rarest whale is absolutely worth the trip.
Posted by Todd McLeish at 7:30 PM