When Jen Scranton went swimming in a protected cove at Fort Wetherill in Jamestown last month, she felt like she was swimming “in a giant wet ball pit.” She said she was surrounded by thousands of jelly bean-sized jellyfish. And although she didn’t get stung, she did feel a bit disconcerted by the experience.
She’s not the only one. Many people throughout Rhode Island and beyond have reported unusually large numbers of jellyfish in recent years. And while this year is not turning out to be a big year for jellyfish in Narragansett Bay, some scientists claim that the warming of the oceans may be creating conditions that benefit jellyfish.
Jack Costello, a biology professorat Providence College who studies jellyfish, said that there is considerable debate among scientists about whether there are substantial changes in jellyfish populations worldwide. 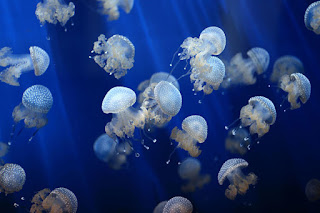 “The popular story is that we’re changing the oceans, getting rid of the fish and causing jellyfish to multiply,” he said. “There may be some truth to that. But there is also clear evidence that some species of jellyfish aren’t doing well,” especially those that spend part of their life cycle on the seafloor.

The only thing scientists seem to agree on is that there is great variability in jellyfish abundance from year to year that cannot be explained. Last year jellyfish numbers boomed in Narragansett Bay. Like algae blooms, some jellyfish species explode in abundance in regular cycles, while others occasionally get blown into the Bay by changing currents.
“Most of the jellies that people know about are the high profile species, the large ones we can see easily,” said Costello. These include the common moon jelly often seen at beaches in the summer and the lion’s mane jelly, a large cold-water species most often seen locally in April and May. The Portuguese Man ‘o War, a southern species familiar to many people, is perhaps the most dangerous variety, but it very seldom shows up in Rhode Island waters.
According to Costello, one of the major periods of jellyfish activity in Narragansett Bay is in late winter and early spring, when several tiny species are most active. But few people notice them. That’s when several species of ctenophores are increasingly abundant.
Ctenophores are gelatinous predators on zooplankton and larval fish, and one species found in Narragansett Bay is clearly benefitting from global warming.
“They overwinter in shallow inshore waters, which warm up before the central bay,” explained Costello. “And when we have a really warm early spring, they produce higher populations, which affect the population of zooplankton and affect the life cycle of other species in the bay.”
Chris Deacutis said that sea nettles, a small bell-shaped jellyfish with foot-long tentacles, may also be increasing in numbers in Rhode Island due to warming waters. The supervising environmental scientist at the Rhode Island Department of Environmental Management said that sea nettles are becoming increasingly common in the salt ponds in South County, where they are often difficult to see but produce a painful sting that “feels like someone rubbed a match across your face.”
Deacutis agrees with Costello, though, that there is little scientific evidence that links temperatures and jellyfish numbers. But, he said, that doesn’t mean it isn’t happening. He said that no one is measuring jellyfish densities regularly, and that would be the only way to determine if changes are really taking place.
“The bay varies significantly depending on the weather from season to season,” he said. “Heavy rains in summer cause hypoxia very quickly, and that would probably drive more gelatinous species. Jellyfish seem to do OK even in low oxygen conditions and can find enough food in those conditions to survive and reproduce pretty well.”
Deacutis said that in a low oxygen environment, the food web becomes “short circuited. The sensitive species like fish swim away or die, while those like jellyfish that can survive on bacteria and small zooplankton do well.”
But even if jellyfish populations really are growing due to the warming climate, he doesn’t believe it is a signal of doom.
“If sea nettles started exploding in the salt ponds, that would be a bad thing for people,” he said. “But would it harm the ecosystem? There’s no evidence of that. Climate change is causing complex reactions to ecosystems like Narragansett Bay. Things are changing. It’s not necessarily true that things are getting worse as much as they are simply changing.”