Rhode Island airports are last refuge for some grassland birds

Early results from the first year of an effort to document the status of breeding birds in Rhode Island have shown what many birdwatchers expected – some species have disappeared from the state since a similar survey was conducted in the 1980s, while others have moved into the area for the first time.
But perhaps the most interesting result of the Rhode Island Breeding Bird Atlas so far is that two bird species that nest in grassland habitat have been observed breeding in good numbers at many of the airports around the state – but nowhere else yet.
According to Charles Clarkson, who is coordinating the five-year project, horned larks and eastern meadowlarks were documented breeding at the airports in Warwick, Quonset, Lincoln and Westerly. 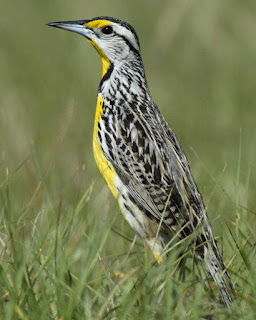 “These birds do very well in short grassland habitat that isn’t necessarily mowed regularly, but where the grass doesn’t grow very tall,” he explained. “They used to be more generally distributed in open areas and natural grasslands, but now these birds are restricted to these very isolated tiny pockets of managed habitat intended for airplane use.
“It’s a testament to how well-managed these airports are,” Clarkson added. “They’re not consciously managing the properties for these species – it’s probably the opposite of what they want – but the airports are the strongholds for these species in the state.”
Two other uncommon bird species have also found airports to their liking. American kestrels, small falcons that hunt for food over grassland habitat, were found nesting at several of the airports and in only a few other sites in Rhode Island. Savannah sparrows breed in large numbers at the airports but much less commonly in other places.
Clarkson said that dwindling grassland habitat around the country has been a serious concern to conservationists for many years. Due to habitat loss, grassland-nesting birds are declining at a greater rate than those that prefer other habitats.
“What’s happening here in Rhode Island is a snapshot of what’s going on nationwide,” he said. “All throughout the Midwest and prairie states and elsewhere, you’ve got shrinking grassland habitat and the conversion of the habitat to large-scale corporate farms. Rhode Island is emblematic of a bigger problem.”
Due to airport security, documenting the breeding success of birds at the Rhode Island airports was quite a challenge. As part of the Breeding Bird Atlas, Clarkson identified 8,250 random places in the state for what he called “point counts” – sites where participants look and listen for birds for a specified time. About 30 of those random sites turned out to be on properties managed by the Rhode Island Airport Corp.
“Some were even right in the middle of the runways, so I wasn’t sure we were going to be able to survey those sites,” he said. “I had to go through a number of channels to get the proper permits and airport passes.”
He is grateful to Paul Poirier, who is in charge of safety training at the airports, who helped him through the process of securing approvals and escorted him to the various airport sites to conduct his bird counts.
“Paul was able to get me everywhere, even on the taxiway,” Clarkson said. “I was standing in the middle of a taxiway counting birds at six in the morning and not concerned about getting run over by a plane in the process, thanks to Paul.”
In total, Clarkson documented about 15 pairs of breeding meadowlarks at the state’s airports and about 25 pairs of horned larks. He also observed a large number of young meadowlarks and horned larks after they left their nests.
“I expected the birds to be there, but I didn’t expect to see so many,” he said. “I was pleasantly surprised.”
Clarkson called the habitat at airports a “double-edged sword” for grassland-nesting birds in Rhode Island.
“The birds have this habitat that is likely going to be around for quite some time, affording them the habitat they need to continue breeding,” he said. “But you’ll never see the population here expand, because these are dead-end populations. The airports are a habitat hold-out for these birds, but there’s not much hope that they’ll ever flourish in Rhode Island again.”
Other notable results from the first year of the Rhode Island Breeding Bird Atlas include the disappearance of northern bobwhite, a formerly common member of the grouse family that requires large areas of grassland habitat, and no records of breeding by magnolia warblers or cerulean warblers, which previously were found at several sites. On the plus side, atlas volunteers documented breeding by common ravens in a number of communities, a species that was not found in the state during the first atlas, as well as the rare saw whet owl and northern goshawk.

This article first appeared on EcoRI.org on September 17, 2016.