James Waters calls ants “the most ecologically dominant animal on Earth,” which may sound like an exaggeration from an enthusiastic ant aficionado. But the assistant professor of biology at Providence College can back it up.
Ants have colonized nearly everywhere around the globe except Antarctica; more than 12,500 species are recognized; and they are social creatures that have a division of labor, communication between individuals, and the ability to solve complex problems. There are so many ants, in fact, that their total biomass surpasses the biomass of every human in the world.
And yet very little is known about the ants that call Rhode Island home.
That’s where Waters comes in. At a lecture on May 11 sponsored by the Rhode Island Natural History Survey, he outlined his efforts to characterize the biodiversity and natural history ofthe ants living on the PC campus, as well as a broader effort to do so for the entire state.
Waters said he is following in the footsteps of Rev. Charles Reichart, a PC professor for 50 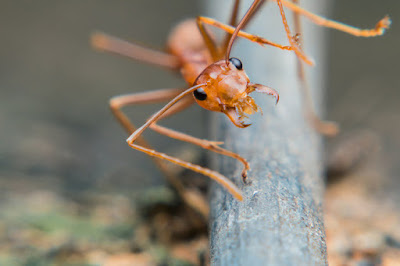 years who died in 1997 and whose collection of thousands of insects now resides at the Smithsonian Museum of Natural History.

“Three years ago my students started taking photos of the local ants on campus, and now we’re taking a more scientific approach to figuring out what ants live there,” said Waters, who joined the PC faculty in 2014. “We set up a grid on campus, set up three pitfall traps per grid with soapy water in them, and collected any ant that fell in.”
It turned out that counting and identifying all of the collected specimens was a laborious task. In 10 weeks, Waters and his students amassed more than 2,000 specimens, and it took almost two years of work to sort and identify them. They found 16 species of ants on the college campus, although since they only placed their traps on the ground, they probably missed many other species that live in trees and other habitats.
The most common ants the students collected were pavement ants, carpenter ants, labor day ants, and the bizarrely named somewhat silky ants and yellow-legged crazy ants. Among the rarest species documented were the short-horned slender ant, long-spined acorn ant, tawny seed-harvesting ant, pale ant and Asian needle ant.
The discovery of the Asian needle ant was particularly unexpected, since it had never before been recorded in New England. An invasive species, it arrived in the United States in the 1930s and has become common in the mid-Atlantic states, but the closest it was believed to have come to Rhode Island was New York.
“So I told all my students that if they found another one on campus they wouldn’t have to take the final exam,” Waters said. “Most of them found one, almost all around one building on campus. I have no idea why they were at that one building, but they haven’t been found anywhere else on campus, or in Rhode Island or New England.”
Among the other species found on the Providence College campus by Waters’ students was the common vampire ant, a species so small that it can barely be seen with the naked eye. “They don’t drink our blood,” Waters said, “but they do puncture their own babies and drink the hemolymph,” a blood-like fluid in invertebrates.
Also found were five species of acorn ants -- tiny insects that live inside acorns – and many citronella ants, which smell like citronella oil.
According to Waters, most ants produce a distinctive odor from trace amounts of a natural oil they put on their exoskeleton. Some ants can even distinguish what colony an individual ant is from based on its odor. And he said that some ant experts at Harvard University are adept at identifying ant species by their odor alone.
Waters can’t do that yet, but he’s learning. He became interested in ants while in graduate school at Arizona State University, where he modeled the flow of air through insect lungs as part of a study of insect metabolism. Other students were studying social insects, including ants.
“I asked them about the energy use of an ant colony, and no one knew the answer,” he said. “I only got interested in the natural history aspect of ants after grad school. I had all this data on the energy use of these species, but I didn’t know what they did on a daily basis. I wound up in Rhode Island and didn’t know anything about the ants here. Now I’m just trying to discover what I can about our local species.”
Over the next two years, he plans to develop and conduct a systematic survey of ants throughout the state. As a relative newcomer to Rhode Island, he is still trying to identify interesting places with unusual habitat to survey. He also intends to visit the Smithsonian to review Reichart’s insect collection to see what ant species the former PC professor found in the mid-1900s.
“So far, we’ve identified lots of new state and county records,” Waters said, noting that he estimates that about 100 ant species live in Rhode Island. “But we still have a long way to go.”