The edge of the world

I don’t like the heat, so when I make travel plans, it’s usually to the north. Far north. Like to Iceland in winter, Alaska in spring, and way above the Arctic Circle in summer. There’s something about the wide open spaces when you’re above the tree line that has always been appealing to me. It’s the opposite of the sometimes claustrophobic forests of southern New England. The abundant tundra wildflowers, stunning blue-green icebergs, and close-up looks at unusual wildlife helps to complete the picture of a travel destination that appeals to all the senses in unexpected ways.
The infinite vistas in the Arctic can be deceiving, however. It’s difficult to judge how far away things are or how large certain geographic features may be. Trust me – everything is larger than you imagine and much further away than you would guess. Bylot Island, a migratory bird sanctuary off the north end of Baffin Island in the eastern Canadian Arctic, is 16 miles 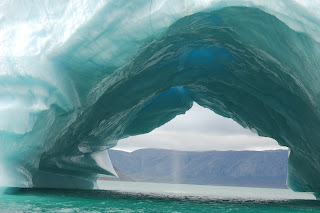 across Eclipse Sound from the village of Pond Inlet, but it looks like it’s just a mile or two distant. Don’t try to kayak there before breakfast, as I once considered, especially during polar bear season.

But Pond Inlet, a village of about 1,300 people, mostly native Inuit whose first language is Inuktitut, is an excellent place to start your exploration of the Arctic. It’s the second largest community in the territory of Nunavut and a picturesque place to learn about Inuit culture, begin a kayak trip, or hire a guide to search for wildlife. But be prepared for the slow pace of life and the uncertain weather conditions that often delay flights and expeditions on the water by a day or two. Be certain to build in extra time in your itinerary.
The accommodations are nothing to boast about – Sauniq Hotel is the only option aside from camping, and the hotel’s cafeteria is the only choice for meals. But no one travels this far from civilization to be pampered. Instead, plan on exploring local ice caves, hiking into the mountains that surround the village, or taking a springtime snowmobile or dogsled tour. Pond Inlet is also conveniently located near Tamaarvik Territorial Park and Sirmilik National Park, both excellent destinations for hiking and wildlife watching.
My first trip to Pond Inlet was part of a research expedition to observe and study narwhals, the small whale with the spiral tusk that helped spawn the unicorn myth. Our guide 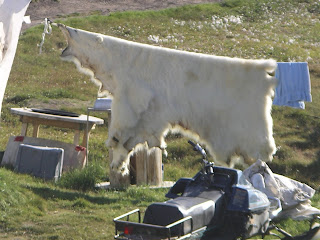 took us four hours west by boat to Koluktoo Bay where we camped for a week and explored the nearby fjords for wildlife. The 24-hours of daylight in early August and spectacular wildlife observations compensated for the mostly overcast and occasionally sodden weather.

On our third night, we awoke near midnight to the sound of heavy breathing outside our tent, but instead of the feared polar bear we found a pod of narwhals rubbing their tusks against each other just 50 feet from the beach where we camped. The behavior, which looks in still photographs to be an aggressive form of swordplay was instead more akin to a gentle nuzzling, a bonding gesture among friends. Later, as we observed several small pods of narwhals around our boat, we dropped a hydrophone into the water and listened to the cacophony of barnyard sounds they emitted beneath the surface – clucking, clicking, mooing, squeaky doors and other entertaining vocal expressions. We also observed killer and beluga whales, ringed and harp seals, Arctic foxes, gyrfalcons, long-tailed jaegers and an impressive list of other wild denizens.
Behind our campsite, we discovered an archaeological site – complete with a partially exposed human skull – from the Dorset and Thule people, ancient ancestors of the modern Inuit. The Pond Inlet Library has an excellent exhibit about the 2,500-year cultural history of the region, including displays from the turn of the 20th century when the village was a whaling station and trading post.
Numerous other Inuit communities dot the islands and bays of the eastern Canadian Arctic, including Grise Fjord, Resolute, Rankin Inlet and Arctic Bay, many of which are worth exploring if time allows. But be prepared – flights are limited and most involve smaller aircraft and even more challenging conditions.
Across Baffin Bay to the west coast of Greenland, summer visitors can explore several native villages, where Greenlandic is the first language, Danish the second, and English is 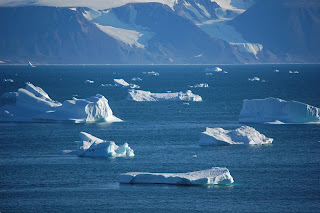 spoken by few but those in the tourist trade. But don’t let that stop you. It’s a chance to completely immerse yourself in a slightly different Inuit culture than that in
Canada. Fly as far as you possibly can up the west coast to the northernmost municipality on Earth, Qaanaaq, where the only accommodation is a four-room bunkhouse with home-cooked meals that are an adventure in themselves.

Qaanaaq is a subsistence hunting village – little is available to eat for most of the year except what residents can capture themselves. They hunt polar bears and walrus in the fall, seals in winter, and narwhals and seabirds in summer, the latter season being the only two ice-free months of the year.
The entire village can be walked end to end in less than 20 minutes, but take your time – you have no choice, since only one flight a week arrives and departs, and there is little else to do. On another narwhal research trip, I hiked the steep hillside behind the village to the receding glaciers that cover all but a narrow coastal strip of Greenland, then walked the quiet beach lined with sled dogs resting for the summer and gazed out at the innumerable icebergs slowly drifting by, some the size of a city block. I later spent an hour in the tiny Qaanaaq Museum, where an impressive collection of artifacts tells the story of the Dorset and Thule people, and in the village’s only giftshop, which sells beautiful jewelry and trinkets carved from walrus and narwhal tusks.
The museum is the former home of ethnographer Knud Rasmussen, a Danish missionary who was the first to map northern Greenland and the first person to cross the Northwest Passage by dogsled in 1921. The house was originally 19 miles south in the village of Thule, but it was moved after a forced relocation of the entire village in the 1950s when the U.S. established a secret military base there. The natives were dropped off in what is now Qaanaaq with no housing or supplies and forced to survive a winter of -30 F temperatures in one of the saddest stories in Greenland’s history.
Mads Ole Christiansen, the leader of the hunting association in Qaanaaq, occasionally invites visitors to his camp a two-hour boat ride away to observe a narwhal hunt and learn about the importance of whales in the Inuit culture. It’s a challenging experience – both physically and emotionally – to watch the impressive animals be killed with harpoons thrown from hand-made kayaks and then to eat their raw blubber, but there’s no better way to learn about the difficult lives of those residing in the far north.
Traveling to Pond Inlet and Qaanaaq isn’t easy, and it’s quite expensive – especially considering the modest accommodations – but it’s a learning experience like no other and an adventure not to be missed.