The five harbor seals relaxing at Citing Rock, a tiny islet 100 yards from the eastern edge of Rose Island, weren’t bothered by the 42-degree water temperature or the 40-degree air temperature. They were swathed in a six-inch layer of blubber that kept them warm in even icier conditions than Rhode Island offers. In fact, the conditions were perfect for the 300-pound marine mammals, which spend the warmer months far to the north and consider the Ocean State a tropical paradise in winter.
But what the animals were bothered by was the kayaker who paddled just a little too close for comfort. So they awkwardly slipped off the rocks and beneath the water’s surface, 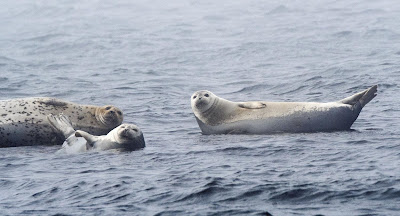 never to be seen again. At least not by the two dozen observers on a Save the Bay education vessel that had come to see the animals. With disappointment on their faces, the participants – including six 10-year-olds celebrating a birthday and five young women aboard as part of a bachelorette party – turned to the boat’s captain, Eric Pfirrmann, who smiled and said, “I guess that means we’ll have to go to my super-secret spot to find some more.”

Rhode Island’s official marine mammal, harbor seals have become common winter residents in state waters since passage of the Marine Mammal Protection Act in 1972 made it illegal to hunt or harass them. Paul Webb, a harbor seal expert at Roger Williams University who describes the animals as “fat sea dogs,” said that the legislation eliminated the bounties once placed on the seals out of fear the animals were eating too many fish.
“They were concentrated up around Maine back then, but once they were protected their numbers really took off,” he said. “They’ve now expanded their range as far south as New Jersey, and there are even small haul-out colonies in Virginia.”
A statewide survey of harbor seals in Narragansett Bay conducted last March by Save the Bay staff and volunteers found 566 seals at the known sites where the animals haul out to rest, a total that University of Rhode Island oceanographer Robert Kenney says means the population – including animals the surveyors missed – is probably between 1,400 and 1,700.
But not all the news is good. Kenney believes that the harbor seal population in New England waters may be declining, despite their local abundance. “It’s probably because of harassment from gray seals,” he said of the largest seal in the region, whose population is booming on Cape Cod. “But they’re unlikely to have a major effect on harbor seal numbers in the bay.”
Harbor seals are still easy to see, though. They begin to arrive in Narragansett Bay from Maine and the Canadian Maritimes in September, and they keep coming until March, when they reach their peak numbers. They all depart for their breeding grounds by late April. During the six or seven months they are in the Ocean State, the best way to see them is on a Save the Bay tour, which depart weekly from Newport Harbor (and less frequently from Fall River).
When the seals were chased from Citing Rock, Pfirrmann steered the vessel north along the west side of Aquidneck Island to Coddington Cove and a hidden group of unnamed rocks visible only from the water or from a seldom visited corner of the Navy base.
As the rocks came into view, the seal watchers pointed and cheered and raised their cameras and binoculars to get a view of the nearly three dozen seals lounging in the sunshine. The animals were dressed in a mottled mix of earth tones, from pale sandy hues to coffee and milk chocolate – the darker ones still wet from recently emerging from the water. Most barely gave the boat and its enthusiastic observers a second look, but the animals appeared to happily pose for pictures and enjoy their moment in the limelight.
Without getting too close, Pfirrmann maneuvered the boat so everyone onboard was satisfied with their views, then slowly headed back to the harbor. Passing Citing Rock again, several seals were visible bobbing in the water, their shiny gray basketball-sized heads and large puppy-dog eyes making everyone smile.
It’s not necessary to have access to a boat to see harbor seals in nearby waters, however. They are easily visible to landlubbers as well. Pfirrmann said they are frequently observed hauled out on Seal Rock, which can be seen from several locations along Newport’s Ocean Drive (though binoculars are needed). The animals are also regularly spotted swimming in the waters around Beavertail State Park in Jamestown and Sachuest Point National Wildlife Refuge in Middletown. The most reliable place to observe harbor seals in season is at low tide on the rocks at the end of the trail to Rome Point in North Kingstown, where their numbers build to as many as 100 in late February and March.

This story first appeared in the February 2018 issue of Newport Life magazine.