The story of my cicada date

The bugs were huge. They looked like houseflies magnified about 30 times, with intense red-orange eyes, red veins in clear wings, and black bodies the size of my thumb. And they were crawling all over me.
One landed on top of my head, another on my shoulder, and a third hit my cheek with a thud and proceeded to walk across my nose and to perch on my forehead.  I could feel them 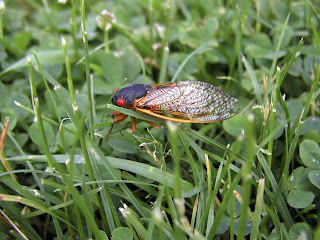 landing on my back and legs every few seconds, and several slowly climbed up my pant leg and clung to my thigh.

My girlfriend was covered with them, too.  Every inch of every leaf, branch, shrub and tree for a mile around us was enveloped in the bustling throng.  And the high-pitched piercing sound of their mating calls was deafening, like a dentist’s drill or a buzz saw.
But despite the creepy feeling of these ugly creatures crawling across our faces, we did nothing to shoo them away.  And believe it or not, it was the highlight of a date I made 17 years earlier with the woman who would later become my wife, Renay.
It started in 1984, not long after we met, when Renay called me in Yellowstone Park where I was working to tell me about the insect swarm in her backyard.  She even held the phone out so I could listen to the racket they made.  I was a budding naturalist at the time, and the unusual insect spectacle intrigued me.
So before the end of the phone call, I asked Renay out on a date 17 years in the future. She agreed to join me on a visit to her neighborhood in central New York on the third Saturday in June 2001 so I could see the bugs for myself.  We knew the precise date to be there because these particular insects are only active for two weeks every 17 years.
How those billion bugs know to emerge together after such a long time, I don’t know. But there was no way I wanted to miss it.
Renay and I forgot about our pledge for more than a dozen years, but news stories of similar swarms in other parts of the country reminded us with a few years to spare.  When the day finally arrived, we drove 300 miles from Rhode Island to get there, and it was the most memorable date we ever had.
Periodical cicadas – the official name of the species that emerges every 17 years – don’t occur in Rhode Island. But several other cicada species do. And while they emerge in backyards throughout the region every year in less spectacular fashion than those I saw in New York, they are no less intriguing.
The males sing by flexing a drum-like organ in their abdomen, and the females make a sound by flicking their wings. Females deposit their eggs in a groove she carves into a tree limb, and when the nymphs hatch, they drop to the ground and burrow into the soil, where they tunnel around and feed on tree roots. When the right time comes, they emerge from the ground, climb up a tree, and transform into an adult insect to begin the process again.
The periodical cicadas are due to emerge this week in central New York again, but Renay and I are unable to make the trip this time. But thanks to the love story they inspired, we’ve already made a date for 2035 to see them again.

This article first appeared in the Independent on June 23, 2018.