Trawling for insights into a changing bay

After dropping an oceanographic measuring device over the side of the Cap’n Bert, a University of Rhode Island research boat, Joe Zottoli records data about water temperature, salinity, and dissolved oxygen levels between Fox Island and the northwest shore of Jamestown. Then he and Captain Steve Barber deploy a small commercial fishing net behind the vessel and tow it along the floor of Narragansett Bay for 30 minutes. After covering approximately one mile, they haul the net back in, dump their catch on deck, and sort the animals by species into colorful baskets.
It’s a process they undertake twice every Monday throughout the year to sample the changing composition of marine life in the bay, a research project that began in 1959 and has revealed a great deal about how the bay has changed from season to season and year to year.
An early spring storm brought poor visibility and rough conditions, but the first tow turned up some species finally on the move after a chilly winter. The season’s first spider crabs 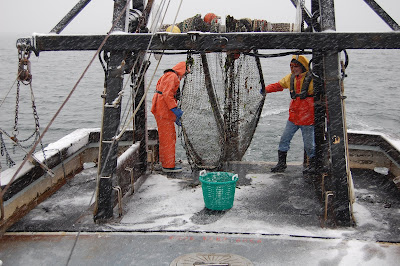 and horseshoe crabs were among the dozen species in the net, a sign that the crustaceans were returning to the bay after wintering in deeper waters offshore. On the other hand, a rare winter flounder was on its way out to sea after spawning in the bay.


“The species in Narragansett Bay are a lot like people in Rhode Island,” said Zottoli, a URI graduate student. “Some species are resident, and other species are temperature dependent, so when the water is warm they’re here and they leave when it gets cold again.”
As Zottoli entered data about the number and size of each species captured, Barber steered the boat toward the mouth of the bay, where they will start the process all over again.
The original objective of the research project, one of the longest continuing studies of its kind in the world, was to assess the seasonal occurrence of marine life in the bay. No one imagined that the study would still be happening 59 years later. But because it is, the project is providing scientists with a unique window into how the changing climate and other factors have affected the composition of fish in the bay.
According to URI oceanography professor Jeremy Collie, who has managed the project since 1988, the total biomass of fish and marine invertebrates in the bay hasn’t changed dramatically through the years, but the particular species present has. When the study began in 1959, the dominant species captured were those that preferred cold water, like winter flounder, cunner and hake, and the abundance of fish was evenly spread out throughout the year. But the bay has warmed by about 2 degrees Celsius since then, so warm water species like scup and butterfish have become more abundant, and fish numbers are high in summer and quite low in winter.
Scup is now the most abundant species captured in the trawl net, with approximately 25,000 individuals caught last year, mostly in the summer and early fall.
“In the 1990s we thought overfishing was the problem, but since 2000 it’s been clear that climate change has been the big driver of fish communities,” Collie said.
Other changes have occurred, as well. The community of marine life in the bay has shifted from mostly fish to mostly invertebrates like crabs and squid, probably because invertebrates can consume a wider variety of prey than fish, which often specialize in a small number of prey species. The bay also has fewer species that live on or near the bottom than it used to, because most of the available food is now higher in the water column.
Over the years, more than 130 different species have been captured in the trawl net and returned to the sea, with a peak of abundance in the 1990s.
Is there likely to be another shift in fish species coming soon?
“There is speculation about how the reduction of nutrient inputs from wastewater treatment plants is affecting the overall productivity of the bay.” Collie said. “But there isn’t a clear shift happening yet.”
He also expects that the composition of marine life in Narragansett Bay will begin to more closely resemble estuaries to the south, like Delaware Bay or Chesapeake Bay. While he has joked that Rhode Islanders may soon have to switch from eating lobster rolls to crab cakes, Collie said “we’re not there yet. We had a couple of really warm years in 2010 and 2012 when we had a lot of blue crabs in the bay, but that peak hasn’t been sustained.”
The data collected from the study is used by scientists around the world. In addition to URI researchers, it is used by the Rhode Island Department of Environmental Management in its assessments of fish stocks that are important to commercial and recreational fisheries. The data is also incorporated into analyses of fish population trends around the world.
“It’s important to have a baseline of what things used to be like so you can look at trends over time, like the impact of climate, changes in water quality, and the impact of human activities like power plants,” said Collie.
The second trawl of the day begins at a spot between Beavertail and Narragansett and covers another mile of seafloor. While sorting, weighing and measuring his catch, Zottoli said it was exciting to see three different kinds of flounder – including one he had difficulty identifying -- plus several skates, blue and rock crabs, and a variety of other species. He called it a hint that spring was finally around the corner.
Unlike the catch of the first trawl, which is representative of the species found in the middle of Narragansett Bay, the second trawl typically catches species more typical of the open water south of the bay.
“The water is generally warmer at the first station, so we get more warm-water tolerant fish and a lot more juveniles,” Zottoli said. “Closer to Rhode Island Sound, we get more cold-water species and deep-water species, which is why we got all those little skates.”
Although the number of individual fish captured was relatively low, Collie said it isn’t surprising or worrisome.
“I like to think of our fish trawl as monitoring the pulse of Narragansett Bay,” he said. “It’s one indicator of how well the ecosystem is working. We measure its pulse every week and see how the fish population is humming along, like the way you measure your own heart rate. As long as we’re going out there and filling our net over the course of the year and we’re getting healthy specimens, that tells us that we have a healthy bay,” he said.

This article first appeared in the August 2018 issue of Newport Life magazine.