In a tiny plywood shed deep in the woods of South Kingstown, migrating songbirds of numerous sizes and colors twitched in the darkness of small cloth bags hanging on hooks. The birds, some of which began their journey in the boreal forests of Canada and were headed for South America, stopped off in South County to rest and refuel, but they became entangled in fine nets set up at the Kingston Wildlife Research Station.

Julie Shieldcastle disentangled the birds and placed them in the bags as she prepared to process them. She weighed and measured each one, then secured an aluminum band around their legs before releasing them to continue their long migration. It’s a project that has taken 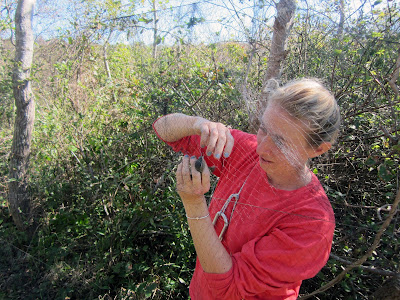 place nearly every day from mid-August through early November for more than 60 years on this 82-acre property just off Route 138. The data collected about the birds has revealed dramatic insights about changing bird populations, expanding ranges, and the effect of climate change on the birds that travel through the region.

“It’s a great place for documenting the long-term trends in bird populations in a typical southern New England landscape,” said ornithologist Peter Paton, the University of Rhode Island professor who has managed the site with Professor Scott McWilliams since 1998. “And the fact that it’s near the coast means that it’s used by a large number of migratory birds.”
The research station is the former home of Douglas Kraus, a URI chemistry professor and avid birdwatcher who began banding birds on his property in the late 1950s. When he died in 2000, he left his house and land and all of his records to the Audubon Society of Rhode Island, along with an endowment to continue operating the site as a bird research facility.
“It’s one of the longest continuously-running bird banding stations in North America, so it really gives you insights into what’s happening to the avian community over time,” Paton said.
For instance, the nets at the site captured about 133 birds for every 100 hours of operation in the 1960s, whereas the capture rate in recent years is just 24 birds per 100 hours. The diversity of species captured has changed little through the years, but the number of individuals is way down.
“It’s quantifying what Rhode Island’s older birdwatchers have observed,” Paton said. “There are a lot fewer birds around than there used to be.”
The data also documents how southern species have expanded their ranges northward in recent decades. Birds like the tufted titmouse and Carolina wren were seldom captured when Kraus began banding birds, but now the titmouse is one of the most commonly captured species each year.
“We’ve also documented changes in the chronology of fall bird migration,” added Paton. “As the climate warms, birds are migrating an average of two days later per decade.”
It’s not just URI researchers that have access to the data, however. Scientists around the country regularly contact Paton to gather information about particular species or about regional migratory trends for national and international studies. Last year, for example, a scientist from Ithaca College used data collected at the site for an analysis of whether two species – the blue-winged warbler and golden-winged warbler – should be lumped together and considered a single species. The Kingston data indicated that the golden-winged warbler migrates earlier than its blue-winged cousin and its wings are slightly longer, which helped the researcher argue that the birds should remain separate species.
In addition to its value as a bird research facility, the Kingston Wildlife Research Station is also prized as a site for hands-on education. Students in URI ornithology classes visit regularly to get close-up views of the species they are learning about and to try their hand at banding the birds.
On a recent class visit, Paton and a group of 21 students checked each of the 15 nets on the property every 30 minutes to disentangle the birds. Among the species they captured were blackpoll warblers, white-throated sparrows, gray catbirds, a northern waterthrush and a rarity – a Kentucky warbler. Prior to releasing each of the birds, Paton pointed out key features of each species, demonstrated how to determine their age and gender, blew on their belly feathers to reveal how much fat they had stored, and discussed their migration routes by showing a map of each bird’s range on his cell phone.
The next time the students checked the nets, they returned to the banding shed with more blackpoll warblers and white-throated sparrows, along with a swamp sparrow that had already been caught once that day.
“This has not been a good day for that bird,” Shieldcastle announced as she released the sparrow for the second time.
What’s next for the Kingston Wildlife Research Station? Paton said there is funding available to continue the bird banding operation for many years to come. And a recent restoration of some of the property’s habitat is leading to new research to evaluate how various bird species respond to those changes.
The biggest question, however, is whether the downward trend in the number of birds captured each year will continue.
“The numbers are dwindling pretty low for a lot of species,” Paton said. “Hopefully we’re not documenting the demise of a lot of these birds, though it looks like that’s sort of what we’re doing.”

This article first appeared in the Fall 2018 issue of South County Life magazine.
Posted by Todd McLeish at 2:09 PM