During a class field trip to Mackerel Cove in Jamestown in 2017, University of Rhode Island student Jacob Reilly picked up an unusual brown seaweed that looked like a hollow ball and asked his professor what it was. The answer was a surprise.
Reilly had stumbled upon the first appearance in Rhode Island of what has come to be called sea potatoes (Colpomenia peregrina), an invasive seaweed native to the coast of Korea and Japan that grows on top of other seaweeds.
“It’s not a parasite; it just settles and grows on top of other algae,” said Lindsay Green-Gavrielidis, a marine ecologist and URI postdoctoral researcher who teaches the class. “We don’t know what impact it’s having on native seaweeds, though we hypothesize that it may be in 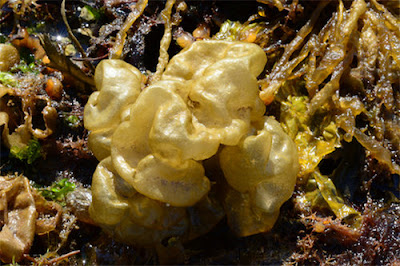 direct competition for nutrients and light. But nobody has done any research to quantify its impact.”

Green-Gavrielidis has a history with the invader. Sea potatoes had been unintentionally introduced to Europe sometime in the early 1900s, probably in ship ballast, and from there it made its way to Nova Scotia in the 1960s. It took until 2010 for it to be discovered in the Gulf of Maine, when Green-Gavrielidis found it while conducting research for her doctorate at the University of New Hampshire.
In addition to the ball-shaped form it typically takes, the seaweed also forms a crust that grows on rocks that easily goes unnoticed, so Green-Gavrielidis speculated that it may have been “hiding out for a long time like that, and then when the conditions were right the ball form started appearing.”
The appearance of sea potatoes along the Rhode Island coast is significant because it has crossed what Green-Gavrielidis calls a major biogeography boundary – Cape Cod. The waters to the north of Cape Cod are dominated by the Labrador Current from Greenland, which makes for colder, more nutrient-rich waters. South of the Cape is dominated by the warm Gulf Stream.
“What it says about sea potatoes is that it has a really broad tolerance for a variety of conditions, and not many species can do that,” she said. “Most species don’t have the ability to move to such very different places. Species that are successful invaders do. We were hoping it wouldn’t be able to cross into this geographic region because of the different conditions.”
To determine how common sea potatoes are in Rhode Island waters, Green-Gavrielidis conducted a methodical search for it at 13 sites along the state’s coastline last year and conducted several quantitative surveys to compare its abundance to a similar native species called sea cauliflower.
The research was published last month in the journal BioInvasions Records.
In addition to Mackerel Cove, sea potatoes were also found at East Beach and Ninigret Pond in Charlestown and South Ferry Beach in Narragansett. It was not found any further north in Narragansett Bay than South Ferry Beach, perhaps because the native seaweed it is most commonly associated with, rockweed, is not found in abundance in the upper bay. No sea potatoes were found in Westerly or eastern Connecticut, either, so it has not likely found its way into Long Island Sound yet.
“The biomass we found in Rhode Island is much lower than what we found in the Gulf of Maine, so maybe it hasn’t been here as long,” said Green-Gavrielidis. “That might also be because the environmental conditions are such that it’s not doing so well here.  We do have some preliminary data that shows that there are herbivores – snails primarily – that eat it, so that’s good.
“Often you think that when a new species comes on the block, there isn’t something that consumes it,” she added. “But we’ve done studies that show that the common periwinkle will readily and happily pursue it.”
That’s a good sign, since there is little that can be done to stop it.
“We need to continue monitoring it to see if its going to increase in abundance,” she said. “We expect it to continue spreading. Whether it moves up into the bay or west to Long Island Sound is unknown. And whether it’s a good thing, a bad thing or neither, only continued research can tell us.”
Green-Gavrielidis and URI colleague Niels-Viggo Hobbs will be conducting a new research project this summer and fall that involves sampling rockweed habitats – the native seaweed most closely associated with the sea potato invasion – so they will be keeping an eye out for the newly arrived seaweed. Their students are also conducting laboratory studies to determine whether native seaweed-eating marine life will eat it and if it is preferred over native seaweeds.

This article first appeared on EcoRI.org on April 4, 2019.