As a child, Kate Masury said that her favorite food was lobster. Even while earning a degree in environmental studies and later teaching marine conservation, she still proclaimed her love for eating seafood. But her friends saw a conflict in her culinary and conservation passions.

“They didn’t see how my conservation side and my love for eating seafood fit together,” she said. “But that’s how I became interested in sustainable fisheries. I thought that eating it gave me a closer connection to the ecosystem.”
A native of Kittery, Maine, who moved to Newport three years ago, Masury is the 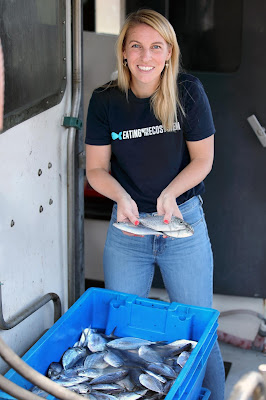 program director of Eating with the Ecosystem, a nonprofit group that she said promotes “a place-based approach” to preserving New England’s fisheries.

“It’s all about eating in balance with the ecosystem, eating diverse species in proportion to their natural abundance,” she explained. “Species don’t exist in isolation from each other; they interact with each other. So if we eat only one or two species, it has cascading effects down the food web.”
But that’s exactly what most people in coastal New England do. According to a study conducted by Masury and a team of volunteers, although more than 50 species are captured in commercial fisheries in the region, just five species dominate the marketplace – lobster, scallops, soft-shelled clams, cod and haddock.
“There’s a lot of room for growth if we want to eat in balance with the ecosystem,” she said.
For instance, whiting is abundant in local waters and captured in great volume by the commercial fishing industry, but almost all of it is shipped to markets in New York. It’s seldom eaten in Rhode Island. Butterfish, scup, dogfish, skate and many others face a similar fate.
“A lot of consumers don’t know that those species even exist here,” Masury said. “At farms we can see what’s growing, but on the seafood side, a lot is hidden from the average consumer unless they spend a lot of time on the docks. And if people do know they exist, they don’t really know how to cook with them; they’re not sure what the flavor profile is and if they’re going to like it.”
So Masury is trying to do something about it.
She hosts a series of public dinners around the region – in conjunction with chefs, fishermen and scientists – that feature local seafood species that are underutilized by local consumers. At each event, a fisherman or scientist talks about the species being served.
“We try to curate a menu that tells a story about the marine ecosystem,” Masury said. “And people have really liked learning about the different species that call that ecosystem home.”
She also conducts extensive market research on what local species are available at area seafood markets and grocery stores.
“There’s not much information about seafood after it hits the dock. No one tracks where it goes once it’s landed. So in order to promote different species, we help to track their availability in the seafood supply chain,” she said.
Last year she sent citizen scientists to dozens of seafood markets around New England to see what species were available, where they were caught, and how much space was devoted to each. She plans to continue this effort in years to come to track how the availability of local species changes through time.
“Monkfish used to be underutilized, for example, but now we’re seeing it in markets competing with haddock and cod for price, which means consumers are starting to demand it more,” Masury said. “But we also found that the marketplace consisted of only 25 to 30 percent local species, with the rest from outside the region.”
To help spread the word about what species are available and how to cook them, Masury has co-authored a cookbook called Simmering the Sea, which provides recipes for such locally abundant species as sea robin, scup, razor clams and slipper limpets. And a food truck in the shape of a boat travels to farmer’s markets and other events to offer cooking demonstrations by area chefs and provide information about local fisheries. She has also started an online seafood club on Facebook and Instagram called New England Seafoodies where people can share recipes, discuss where to buy certain species, and hear from fishermen about what they’re catching.
“If we eat a wider diversity of species in proportion to their natural abundance, then we have minimal impact on the food web,” Masury concluded. “If we don’t take care of the ecosystems that provide our food and the habitats that our seafood relies on, then we won’t have healthy fisheries or healthy ecosystems.”

This article first appeared in the November 2019 issue of Newport Life magazine.
Posted by Todd McLeish at 5:54 PM