Sea urchins could be Rhode Island’s next climate-resilient crop

Atlantic purple sea urchins are common in coastal waters along the East Coast, and University of Rhode Island scientist Coleen Suckling thinks the Ocean State could become the home of a new industry to raise the spiny marine creatures for consumption in Japan and elsewhere around the world.

She has teamed with a company called Urchinomics, which is pioneering urchin ranching around the world. Suckling is testing a sea urchin feed the company developed in Norway to see if Rhode Island’s urchins will eat the product and, in turn, become commercially appealing.
“Sea urchins are generally good at coping with climate change; they appear to be resilient to warming and ocean acidification,” said Suckling, URI assistant professor of sustainable 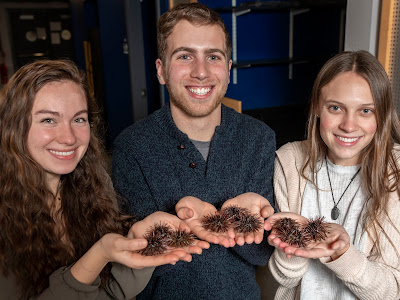 aquaculture. “So they’re a good species to turn to for commercial harvest. And you can get a good return on your investment from them.”
The global sea urchin market is valued at about $175 million per year, with about 65 to 70 percent of the harvest being sold to Japan. Urchins are primarily used for sushi, though they are also an ingredient in a variety of other recipes as well.

Red urchins and Pacific purple urchins are harvested in California, Alaska and British Columbia, while green urchins are captured in Maine and Atlantic Canada. Little is known about how successfully Atlantic purple urchins would compete in the marketplace, but Suckling is taking the first steps to find out.

The edible part of the sea urchin is its gonad tissue – which chefs refer to as roe or uni and Suckling describes as tasting “like what you imagine a clean ocean smells like” – but the tissue must be firm and bright yellow or orange to get the best prices.
“Wild urchins typically have small gonads and the color isn’t great, so commercial harvesters are collecting wild-caught urchins and feeding them an enriched finishing diet in cages in the open water for a few months to allow them to grow larger gonads and develop good color,” Suckling said.
At the Narragansett Bay Campus, URI undergraduates Max Zavell, Anna Byczynski and Alli McKenna are undertaking a three-month food trial on purple urchins caught in Rhode Island waters. The animals are being fed a variety of foods to see how well they grow and if they become marketable. The students monitor water quality and regularly weigh and measure the urchins, and by February they should have preliminary results.
“If they become marketable, then it opens up a whole interesting range of potential options,” Suckling said. “Under future climate conditions, there may be a need to diversify what we produce in the seafood sector. And since urchins are good at coping with acidification, this could be a good opportunity here in Rhode Island to exploit sea urchins.”
Even if the formulated diet works as expected, many additional questions remain to be answered before urchins could be raised commercially in the state.
“It’s a local species, so we can potentially grow them here, but is it something the Coastal Resources Management Council and the Department of Environmental Management would be interested in?” Suckling asked. “Are there aquaculture farmers interested in growing them? Can we ranch them reliably? We’re just taking the first step to see if it’s worth the effort to answer these other questions.
“Part of my role is to try to understand what seafood we may need to turn to in a sustainable manner so we can maintain food security and economic security in the future,” she added.