When University of Rhode Island research scientist Amy Mayer captured a bobcat in Charlestown in 2016, she had no idea where it would lead her or what she would learn from it. But after checking its health, taking a blood sample and placing a radio-tracking collar around its neck, she released the animal as part of a five-year study – the first of its kind in Rhode Island – to learn where the wild cats are found in the state and what habitat they prefer.
It didn’t stay in Charlestown long.
“It ended up spending most of its time in Saunderstown near Casey Farm,” said Mayer, whose research is conducted in collaboration with the Rhode Island Department of 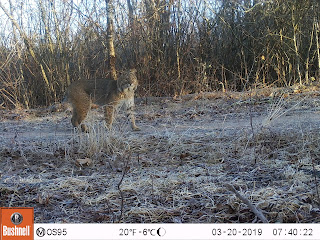 Environmental Management. “The interesting thing is that it was always hanging around neighborhoods. I spent a lot of time driving around Plum Beach and other nice neighborhoods keeping track of it.”
And then it disappeared. She couldn’t relocate it for days and days. Using a telemetry antenna dialed into the collar’s radio frequency, she had to be within a third of a mile of the animal to detect its location. So she kept driving farther and farther afield until she heard the distinct beeping noise that indicated she had found it. In Snug Harbor, where it spent the next several months.

“We think it moved because of some sort of resource availability,” Mayer speculated. “The habitat in the two areas isn’t all that different, so maybe it couldn’t find enough food and just decided to move. Or maybe it was competition from another bobcat that made it shift locations.”
Whatever the reason, it helped Mayer gain a better understanding of the ecology of Rhode Island’s only wild feline.
Bobcats are the most widely distributed native cat in North America, living in deserts, mountains, prairies and coastal regions. Weighing up to 35 pounds, they eat a wide variety of small mammals and other prey. In Rhode Island they are believed to consume mostly rabbits, 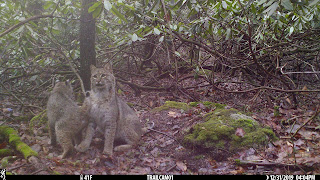 squirrels and rodents. The animals have been sighted in nearly every community in mainland Rhode Island, but their hotspots are in South County – mostly South Kingstown, Charlestown and Westerly.

And their numbers are increasing.
“It’s really hard to get a good population estimate, since to do that you have to be able to do a trap-and-recapture study, and we’ve learned that they’re very difficult to trap,” Mayer said. “Or you have to be able to identify individuals from photos, which is also difficult because their spot patterns aren’t very clear. But I’d estimate the population to be somewhere between 50 and 100, probably closer to 50.”
To learn more about them, Mayer set up 100 trail cameras around the state – including 40 in South County – to detect where they are found. Bobcats were photographed at 20 of the South County sites and at a total of 40 statewide, but in most cases the animals were only photographed once or twice at each site.
“They move around a lot and don’t park in any one area for long,” she said. “They travel pretty widely, especially the young ones that don’t have an established territory yet. We trapped one young bobcat near URI, and then it spent time in Saunderstown before going all the way to Stonington, Connecticut, and back.”
Loss of habitat is typically the greatest threat to large animals, but bobcat numbers in Rhode Island have increased over the last 80 years at a time when residential development in the region has been quite high.
“It’s a weird conundrum that habitat is shrinking, but for whatever reason, they’re able to survive and they’re doing well,” Mayer said. “In the 1950s they were classified as rare, but not anymore.”
The biggest threat facing the animals now is road mortality. As many as 10 bobcats are reportedly struck and killed by vehicles around the state each year. Others probably go unreported. Route 1 through South County is an especially dangerous place to be a bobcat.
“Of the animals we tracked, they didn’t necessarily avoid areas of high road density. Maybe that’s because roads have the shrubby edge habitats along them that bobcats prefer,” said Mayer.
Trapping of bobcats for their fur is prohibited in Rhode Island, and there is no evidence to suggest that they are poached on a large scale, though Mayer said that a bobcat is occasionally mistaken for a deer and shot during hunting season.
Rhode Islanders who are alarmed at the growing number of bobcats in the region have little to worry about, according to Mayer. "They tend to be secretive, so most people don't even notice when they are in the neighborhood," she said. "People should use the same precuations they do with any wild animal - don't leave pets out unattended, especially in the evening, and keep sources of food secured indoors."
While the objective of Mayer’s camera trap study was to learn about bobcats in the state, the cameras also captured more than 200,000 images of other animals, including deer, raccoons, opossums, turkeys and more.
“We got photos of fishers at 95 out of the 100 sites,” she noted. “We’ll be able to use all of that data for studies of the distribution of other animals in the state as well.”
Most importantly, however, biologists now know a great deal more about Rhode Island’s elusive bobcat.
“We started off with zero information about bobcats in the state, and now we have a huge database of information about them to work from,” concluded Mayer. “It will be super useful for DEM to keep track of their distribution, and we can combine our data with other studies taking place in other states in the area. It has definitely been a successful project.”

This article first appeared in the June 2020 issue of South County Life magazine.
Posted by Todd McLeish at 11:40 AM