When Peter Green moved into a sixth-story loft in Providence facing what many have dubbed the Superman building, he started noticing the peregrine falcons that nest atop the iconic structure. A photographer since high school, he naturally started taking pictures of the birds.
Soon he noticed other raptors – hawks, falcons and owls – around the city and spent as much time as he could watching and photographing them, too.
“I started sharing my pictures with family and friends, and they got sick of looking at bird pictures,” said Green, 46, a freelance graphic designer originally from Long Island. “I really wanted to tell the story of the birds, so I started a blog, Providence Raptors.”
Many of the birds featured on his blog have now become the stars of a book, Providence Raptors: 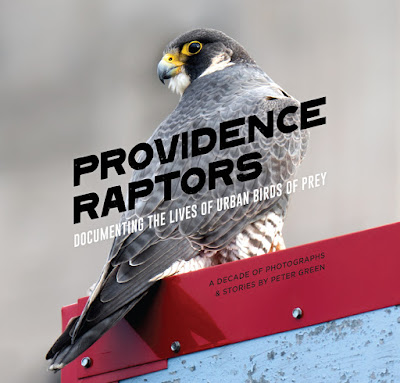 Documenting the Lives of Urban Birds of Prey, which he describes as “full of photos and educational stories and ways to help raptors survive in the city. It’s got all my best photos, all the stories I want to tell, and all the great people who work to protect raptors.”
It’s a captivating look at the fascinating lives of the raptors that are surprisingly common in the capital city, their struggles to survive, and their efforts to raise their young year after year. Among the species featured are the red-tailed hawk, American kestrel, Bald eagle, Cooper’s hawk, osprey and eastern screech owl.
Despite the abundance of other birds in Providence, Green focuses exclusively on raptors in part because they’re predators.
“If there were coyotes or bobcats killing animals downtown every day, people would be up in arms about it,” he said. “These birds are killing things all the time – there’s blood dripping down buildings, bloody carcasses around, I find a lot of bird heads because peregrines decapitate them – and yet people don’t even notice them. It’s funny to me that everyone is waiting for their bus and these giant birds are fighting right overhead.”
As striking as the photographs are, Green said the accompanying stories are just as important. Like his story about the barred owl in Burnside Park.
“For 10 years I was watching hawks and falcons, and then in 2018 an owl showed up to eat rats all
night,” he said. “Every night for four months I’d go out and watch it, and I never knew exactly where it would be.”
One night, he noticed the bird had blood-soaked feathers and appeared to be missing an eye. He feared it was badly injured.
“The owl was too high in a tree for me to safely reach, but that was actually good news,” Green wrote in his book. “If it was seriously injured and lost an eye, it likely would have been grounded at the location of the accident. The fact that the owl was able to return to its favorite roosting spot indicated it could fly and also see well enough to navigate through the branches…After a few days, rain washed away the dried blood and the owl flew out of the tree on its own. It made a full recovery without any human intervention.”
While Green has exhibited his photographs at the Audubon Society of Rhode Island’s Nature Center in Bristol and sold a few prints, he thinks his images are best displayed in a book.
“I’m not trying to get a beautiful portrait that someone wants to put on their wall,” he said. “A print of a bird on a blue sky will sell, but I’d rather show a bird tearing apart a pigeon in Kennedy Plaza with people around it to show what happens in the city. A bird on a tree isn’t as interesting as a bird on a brick wall, because that wall gives it a location. The building they nest in is more important to me. If I have a shot of a hawk with a RIPTA bus, it’s just so Providence.”
In addition to the photographs and stories, the book also includes tips that readers can follow to help raptors survive in the city. He discourages the use of rat poison, for instance, which may kill raptors feeding on rats, and encourages builders to use bird-friendly glass that birds are less likely to fly into. He also advises that domestic cats be kept indoors and provides information about the Born to be Wild Nature Center, which rehabilitates injured raptors, and the Wildlife Rehabilitators Association of Rhode Island.
Green designed the book himself – that’s his profession, after all – and his father, a printer and print broker in New York City, handled the printing. The first printing of 300 copies sold out in one month, and a second printing was due for delivery in mid-December.
The book can be purchased at Barrington Books, Books on the Square, the Audubon Nature Shop, Symposium Books and from his website.
“I like to dispel urban legends, and that’s part of what this book does,” Green said. “So often, people who know about the falcons and hawks in the city think the government purchased them to kill rats, or that the owl and eagles escaped from Roger Williams Park Zoo. It’s sad that people are so disconnected from animals. I want them to know that there are animals among us and how to help them.”