Saltmarsh sparrows continue their struggle to survive. The formerly common bird that lives exclusively in coastal marshes on the U.S. East Coast is predicted to go extinct within the next 50 years due to rising sea levels resulting from the changing climate. New research by scientists at the University of New Hampshire finds that the birds are advocates of gender equality, a reproductive strategy that may benefit their populations, but it’s probably too little too late to extend their time on Earth.
According to UNH Assistant Professor Adrienne Kovach, female birds of many species – from songbirds and seabirds to parrots and raptors – can control whether they produce male or female offspring. It can sometimes be a beneficial strategy from an evolutionary perspective 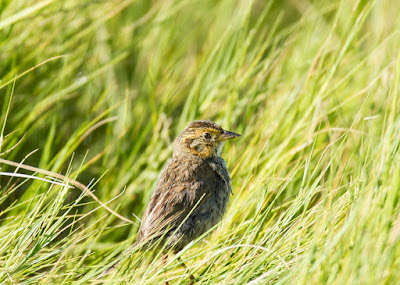 because environmental circumstances or other factors may favor the success of males versus females.

“Evolutionary theory suggests that if the potential benefits of raising one sex over the other vary in relation to environmental or maternal conditions,” she said, “then females should favor the production of that sex. Typically, high-quality sons are more beneficial to mothers because they have the potential to produce far more grandchildren than daughters can, as males can mate many times but females are limited by how many eggs they can produce, incubate and raise to fledging.”
But there is a risk to producing more sons than daughters, too. Kovach said a male-biased population “may be especially troubling, as females are the ones who produce the eggs and offspring.” In addition, daughters often require fewer resources to reach maturity, and if they survive they almost always reproduce. Males, on the other hand, can be “competitively inferior” and may not reproduce at all.
“With this in mind, one could logically say that producing daughters represents the safe bet,” said Kovach’s colleague Bri Benvenuti. “You might get a smaller payout in terms of numbers of offspring, but you know you’ll get something.”
The saltmarsh sparrow’s tenuous situation raised interesting questions for the researchers.
“We thought that the saltmarsh sparrow system provided a neat set of circumstances in which females might be expected to manipulate their offspring sex ratios,” Kovach said.
The birds are considered one of the most promiscuous in the world, with almost every chick in a typical nest fathered by a different male. The species’ likely extinction is linked to their preference for nesting in marsh grasses just inches from the ground. The rising sea level and increasingly severe storm surge floods their nests and often causes reproductive failure.
Since male offspring are larger and therefore may be more likely to survive a flooding event, Kovach and Benvenuti speculated that female saltmarsh sparrows might intentionally produce more sons. So they collected nesting data from breeding sites in Maine, New Hampshire and Massachusetts and analyzed the DNA of chicks to determine the sex of the offspring. They also evaluated whether environmental conditions, maternal health or other factors influence the sex ratio.
The researchers were surprised to find an even sex ratio when averaged across the five years of the study. While they did find a pattern of yearly variation in sex ratio, it always corrected itself the following year.
“Females respond to higher frequencies of one sex by increasing production of the rarer sex, which would have a temporary fitness advantage,” said Kovach. “Our findings overall show support for balanced offspring sex ratios at a population level over time.”
Independent biologists Steve Reinert and Deirdre Robinson study saltmarsh sparrows at Jacob’s Point in Warren, and even though they captured 32 males and just 20 females last year, they believe the sex ratio of the population is 1-to-1.
“This probably relates to the way the males move in and out of our study site seeking copulations…while the females are nesting and staying put,” Reinert said. “It would be easy to get the wrong idea on sex ratios without intimate knowledge of the population.”
Although production of more males may give the birds a better chance of survival, given the rising seas, Kovach and Benvenuti think a balanced sex ratio may have even greater benefits. They said that if the sex ratio leans too heavily in one direction or the other, it may not be good for the long-term trajectory of the population.
“If saltmarsh sparrows manipulated their offspring sex ratios in response to environmental conditions, then the consistent environmental changes predicted by rising sea levels could result in skewed population-wide sex ratios, which can be detrimental for declining species and small populations,” Kovach said. “Knowing that saltmarsh sparrow sex ratios will not be biased in response to these future changes is one bit of good news for this species that is already in trouble.”