Molecular tool shows that animals are what they eat

A new oceanography professor at the University of Rhode Island has developed a unique molecular-scale tool for measuring the effect of climate change and other factors on the health of ecosystems. Kelton McMahon has already used it to discover how penguins have been affected by environmental changes around Antarctica, and now he is turning his attention to southern New England and focusing his technique on seabirds, commercial fisheries and the marine food web of Narragansett Bay.
According to McMahon, who grew up in southeastern Connecticut and joined the faculty of the URI Graduate School of Oceanography last August, his new tool is based on the age-old concept that you are what you eat. He said that animal tissues contain the chemical fingerprint of their diet, as well as that of the climate and the structure of the food web.
“The basic idea is that the ratio of heavy to light isotopes of elements like carbon or nitrogen in your diet gets passed on to you in predictable ways,” he said. “We can calculate what 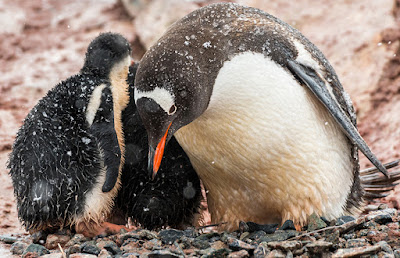 an organism is eating because we know how the ratio of isotopes change as they move from diet to consumer. It allows us to predict who is connected to whom in the ecosystem.”

Isotope ratios have been used by scientists to study food webs for more than 40 years. But rather than taking an average ratio for an entire animal, McMahon’s new technique enables him to focus on the isotope ratio of individual amino acids, which provides him with a great deal more detail about how an organism processes and allocates resources.
By studying the isotope ratios of amino acids in the egg shells and feathers of wild Gentoo penguins and comparing them to those of museum specimens more than 100 years old, he has revealed insights about how the environment in the Southern Ocean has changed in recent decades. He found, for instance, that the penguins ate mostly fish a century ago, but they shifted to krill and then back to fish over the last 80 years.
McMahon believes that humans are probably the cause of that shift. During the commercial whaling era in the late 1800s, krill-eating whales were hunted to near extinction, so more krill was available for the penguins to eat. When whale populations began to recover in the 1960s and 1970s, the penguins returned to a diet dominated by fish. And now that krill is being harvested in large quantities for use as fish oil supplements, this diet shift back to fish is getting further exacerbated.
Isotope ratios also reveal a story about climate change in Antarctica.
“As the climate is warming, ice in the area is disappearing and allowing more sunlight to penetrate into the water, stimulating plankton to grow, which increases the value of the nitrogen isotopes at the base of the food web,” he said. “We’re seeing a climate change signal in our samples on top of an anthropogenic signal from whaling, and both are acting synergistically to alter the food web.”
Now that he has successfully demonstrated the value of his new tool by studying penguins, McMahon is beginning to use it to evaluate the changes in local food webs. He is assessing how climate change is influencing regional commercial fisheries and the availability of cod on the continental shelf off the coast of Rhode Island.
“There have been some interesting changes in cod dynamics,” said McMahon, who is collaborating on this work with URI graduate student Joe Langan. “We’ve seen a larger increase in the cod population in southern New England than you might expect, since cod prefer cold water. They should be declining, yet we’re seeing pockets where cod are expanding in population off the shelf. We want to figure out what’s driving that.”
He is discussing with another URI graduate student, Anna Robuck, how his technique could help her assess how the role of seabirds in marine food webs influences the accumulation of contaminants in their tissues. And he has joined a group of scientists from around Rhode Island to quantify how changes at the bottom of the food web in Narragansett Bay affect the population dynamics of the species at the top of the food web.
“I’ve used the technique on a wide range of things, from sharks in the Pacific to deep sea corals to penguins to people,” McMahon said. “Anything that produces amino acids in their biological tissues has the capacity to be studied through these techniques. We can use it to answer a wide range of questions about the sources and cycling of organic matter from all over the world.”