While the major heat wave last week may only hint at the long term climate changes taking place on Earth, the indisputable evidence from around the world – especially in the Arctic – continues to mount.  Even narwhals have been used to collect climate data.
University of Washington biologist Kristin Laidre has found a new and unusual use for what may be the narwhal’s greatest behavioral claim to fame – their incredible ability to dive to great depths.  In 2006 and 2007, Laidre successfully attached satellite transmitters to14 narwhals in Melville Bay on the west coast of Greenland, and in addition to collecting data on the animals’ geographic positioning, the tags also recorded the temperature of the water as they dived to the bottom.  While Laidre knew that temperature data would be somewhat insightful to her narwhal research, she also guessed that oceanographers and climatologists might find the data useful as well.  It is difficult to use traditional oceanographic measuring devices to monitor water temperatures at great depths, especially in the winter when the water is frozen over for many months.  As a result, researchers have little data from the middle of Baffin Bay to feed into their climate models.  Instead, they have used temperature readings from coastal locations or estimates calculated from historic data, which clearly provide only a hint of the true picture.
“The gliders that oceanographers occasionally use to collect this data sort of look like a streamlined narwhal, with a long pointy antenna, but they’re not as smart as narwhals because sometimes they can’t find the surface and get caught under the ice,” Laidre said. When the narwhal-collected temperature data was published in a scientific journal in 2010, it generated considerable media attention, not only for what oceanographers learned about water temperatures but also for the unusual way the data were collected.  Thanks to the narwhals, water temperatures were determined to be about 1.8 degrees F warmer than what the climate models predicted, and the surface isothermal layer – a layer of water that is at a constant temperature – was 160-260 feet thinner than previously believed.
“I’m not an oceanographer, but for me the excitement was the proof of concept -- that it worked and we collected useful data and the scientific community seemed to be interested in it,” Laidre added. “[The data] suggested that Baffin Bay has continued its warming trend, though I don’t know that it was terribly surprising to the oceanographers.”
Similar data is being collected by narwhals along the East Greenland coast this year.
Posted by Todd McLeish at 1:39 PM 2 comments:

The extreme hot weather that has taken over most of the U.S. in the last week or more has most of us wishing for an opportunity to dive into the ocean.  And yet here at the beaches of New England, the water is too cold for most people to spend much time in without a wetsuit.  That’s not a problem for narwhals, of course, as they are among the champion deep divers of the marine world and are well suited to doing so in the coldest of waters. 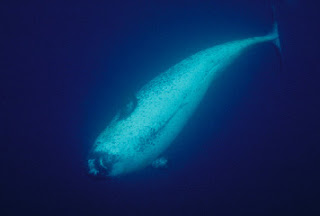 With a layer of blubber three or four inches thick, narwhals have no difficulties surviving in the extreme cold.  At great depths, where it is often even colder but where they must dive to feed, they are faced with pressures greater than 2,200 pounds per square inch, which they withstand with a flexible and compressible rib cage that can be squeezed without harming them as pressure increases. To carry along enough oxygen to sustain them on deep dives of up to 25 minutes, they have evolved several nifty solutions, including an enormous concentration of oxygen-binding myoglobin in their muscles, more than twice that of most seals and eight times as much as land animals, enabling them to swim under water at speeds of one meter per second for 20 minutes without taking another breath.  With muscles better suited for endurance than for speed, narwhals can save even more oxygen by turning off the blood flow to non-critical organs and other body parts.

When they are diving to feed on the bottom, they often do so repeatedly to depths in excess of 1,500 meters.  The transit from the surface to the bottom is typically a 30 minute round trip, mostly spent swimming straight down and straight back up.  During most of the year, they make that round trip 10-20 times a day every day all day long.
But Jack Orr, a biologist with the Canada Department of Fisheries and Oceans, told me that narwhals may also use several other diving strategies.  When they are living in dense ice, they may often use a V dive for feeding and a U dive for finding their next breathing hole.  During a V dive, the animals dive straight down to feed at a certain location where they know they can find food, and then they swim straight back up to the surface to a different known breathing hole.
“Whereas with a U dive,” Orr said, “they’re going down and then going horizontal for a while and then they’ll start their dive up toward the surface again.  What we presume is that they’re getting to a certain depth and then using their echolocation to find their next breathing hole. If you’re 400 meters below the surface and you start looking for a hole and you find one 400 meters away versus 50 meters away, then you can decide whether you have enough breath to go forward to the next hole or, no, I don’t have the air so I have to go back to my original hole.  These animals are living in such dense ice over the winter months that they’re coming up in breathing holes that aren’t really even a hole that you would see at the surface.  That’s a behavior that they’ve adapted to navigate in dense pack ice.”

Whatever they do down there and however they capture their prey, their extreme diving behavior certainly makes them unique among the world’s cetaceans, and gives me another reason to be in awe of their remarkable lifestyle.
Posted by Todd McLeish at 2:18 PM 6 comments:

Life in a Narwhal Hunting Camp

It was a year ago this week that I departed on my greatest adventure yet, traveling on seven flights over three-and-a-half days to reach the northernmost municipality on the planet, Qaanaaq, Greenland.  It was there that I joined up with Mads Ole Kristiansen to observe a subsistence hunt for narwhals.  It wasn’t what I would call fun, but it was an experience I’ll never forget.
When we arrived at the nearby hunting camp of Siunnertalik, Mads Ole said that narwhal hunting is mostly about waiting: sit high on an overlook in the cold and wind and stare through binoculars while waiting for a narwhal to surface close enough to approach in your handmade kayak.  That could take hours or days, depending on the whim of the narwhals.  When a narwhal is sighted, the hunters rush to launch their kayaks, but even then they spend a long time sitting quietly on the water waiting for the animals to resurface, then reposition themselves and wait again for them to come closer.  And when the whales don’t come close enough, the hunters return to camp where the waiting and watching resumes.  For the next 15 hours, we waited and watched.  My hands and feet were numb within the first 15 minutes.
It was quickly apparent that time has little meaning there.  By 3 a.m., five hours after I would normally have been asleep, the camp was still lively, food was being shared, and hot tea was still being offered.  Two more families of hunters had arrived, their two children were still awake and exploring the nooks and crannies around camp, and the men were sitting on a driftwood log talking quietly and watching for narwhals.  Their wives were watching from high above at the observation point.

Mads Ole and I were warming up in the tent when someone called out from the lookout at 4:02 a.m. that narwhals were approaching. Before I even understood what was happening, Mads Ole dashed out of the tent, ran up to the observation point, and quickly verified the location of the whales.  Then he jumped into his kayak and took off, followed shortly by the other two hunters.  When I finally climbed to the lookout and raised my binoculars, I could see dozens of narwhals in all directions.  From my vantage point it appeared that the hunters were surrounded by narwhals, some of which looked as if they were very close to the kayaks, yet the hunters sat still, not paddling closer, and never hoisting their harpoons. It was exciting to watch, but probably quite frustrating for the patient hunters.  At 5:07 the hunters returned to camp, but as they were climbing out of their kayaks, another call came out that more narwhals were approaching quite close to camp.  Only Mads Ole decided to try again.
Within minutes he was in perfect position to intercept at least a dozen narwhals swimming in a line towards him.  He waited, unmoving, then took a couple paddle strokes, then waited some more.  The narwhals came closer, and several swam right by him, appearing to me like they were just arms’ length away, and still he didn’t move.  Then three narwhals surfaced at once just behind him, and as they went under, he paddled alongside them and lifted his harpoon, but they resurfaced too far away, so he lowered it again.  I thought he had missed his best opportunity, but two whales trailed the group, surfaced, dived, and when they surfaced again, one was right beside Mads Ole.  He quickly raised his harpoon, held it in the air for what I thought was far too long, and threw it.  The harpoon struck the narwhal in the flank, and the animal responded with a sharp slap of its tail and dived, taking with it the sealskin float to keep it from sinking.
A celebratory cheer rang out from the hunters and their families, and surprisingly, from me as well. As difficult as it was for me to watch, I was pleased for the hunters that they were successful in providing food for their table for the coming months. And I was pleased to be offered a piece of muktuk – raw skin and blubber from the freshly killed whale – to help them celebrate the hunt. But I was equally pleased that their success meant that I could return South again from the coldest summer of my life.
Posted by Todd McLeish at 6:08 PM 10 comments: