Most adults will look back on their teenage years and recognize that they were challenging times. Puberty, dating, school pressures, and difficult relationships with parents all come to a head during that time.
But it’s not just people who struggle through adolescence. Many animals do, too. And now is the time when adolescent animals are struggling with many of the same pressures as human teenagers, a time when they sometimes end up making a mess of things right in front of us.
Every fall, as mature animals are preparing to breed again, they realize that they’re stuck with a bunch of unruly youngsters from their previous litter. Like in human families, it’s often the males that are the biggest problem. They start to challenge their parents for dominance, sniff around for their first sexual encounter, and always behave like they’re angry at the world. Eventually they set off on their own or are kicked out of their mother’s territory and have to fend for themselves.
Seldom is it a smooth transition. 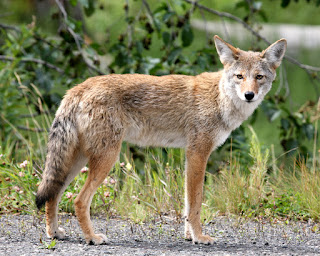 For coyotes, it usually happens in October when they are eight or nine months old. They wander into adjacent territories and have run-ins with other coyotes. Or they end up hugging the edges of mediocre habitat and the zones between established packs.
“They aren’t street-wise yet,” explained Numi Mitchell, who has studied the coyotes living on Aquidneck Island for more than a decade. “They may naively sit on people’s lawns and wander urban areas. They’re out at odd hours and tend to have encounters with people.”
She has seen the same thing happen in the autumn with young raccoons and squirrels, too. Even horses and cattle. “That’s when they all start to have their own opinions,” she said.
Mitchell said the wandering of adolescent animals is the reason for the increase in roadkill every fall. The animals don’t know where they’re going or what they’re doing, and they aren’t smart enough yet to run from oncoming headlights.
University of Rhode Island Professor Tom Husband has made similar observations about bears, bobcats, beavers, fishers and other mammals. And he said that part of the challenge is that the landscape has become more and more urbanized, which makes it increasingly difficult for these unsophisticated animals to find suitable habitat that isn’t already occupied. It causes them to explore areas where an adult animal might not go.
“I remember a bear scratching his back on a tree and holding up a bird feeder, chugging it like a Bud Light,” said Husband. “A mature bear in its own territory isn’t going to do something like that. They’re just somewhat desperate and naïve about how to find food and a territory.”
Most of the bears observed in Rhode Island in recent years are believed to have been adolescent males evicted from their parents’ territories in Connecticut and Massachusetts and searching for a place to call home. After stumbling around on their own for a few weeks or months and showing up on the television news, most of them head back where they came from.
So if you spot an animal this month that looks lost and hungry and a little beaten up, give it a break. Don’t feed it, because that will cause all sorts of other problems. But treat it like you would your own teenage runaway – with a dose of kindness and understanding and just a little bit of suspicion about what it’s gotten itself into.

This article first appeared in the Newport Daily News on Oct. 22, 2016.

Posted by Todd McLeish at 12:47 PM No comments:

Most scientists agree that the water quality in Narragansett Bay and the waters that flow into it is quite good and getting better. But that’s not true by every measure. In fact, a University of Rhode Island oceanographer who studies chemical pollutants in the oceans found that a New Jersey river designated a Superfund site is actually much cleaner than some water bodies in Rhode Island when it comes to a recently banned group of pollutants called perfluorinated compounds.
According to URI Professor Rainer Lohmann, perfluorinated compounds have long been used in the production of Teflon and the non-stick coatings on pizza boxes and popcorn bags, as well as in the waterproof coating added to some clothing.
“Everyone has the stuff in them at low concentrations,” Lohmann said.
The compounds are also very good at extinguishing fires fueled by gasoline and other fuels, so the foams that airports use to fight airplane fires contain the chemicals. While few such fires occur each year, the foams are used regularly during fire training exercises at every U.S. airport, where the chemicals percolate through the ground and run off into nearby streams, ponds and bays.
“The problem with these compounds is that they don’t break down,” Lohmann said. “They bioaccumulate, so they aren’t good for our health. They increase in concentration as they go up the food chain – and people are at the top of the food chain, along with polar bears, bald eagles and other large animals.”
Lohmann said that the Environmental Protection Agency required that production of the worst perfluorinated compounds be phased out by 2015. But many manufacturers of the compounds have gotten around the ban by making minor changes to their chemical composition, which makes them only slightly better than the banned versions.
“And just because production stops doesn’t mean the compounds go away,” Lohmann added. “They continue to leach into our groundwater and all kinds of other things. So we will continue to have the legacy of them, probably for decades to come.”
Lohmann and colleagues at Harvard University analyzed water samples from 28 water bodies in Rhode Island and nine sites along New Jersey’s Passaic River and published their results last month in the scientific journal Environmental Science and Technology Letters. The Rhode Island samples were collected by volunteers participating in the URI Watershed Watch program, which monitors water quality at 200 sites around the state.
“I’ve taken water samples from Narragansett Bay for years, and we’ve always found these compounds in the 1 to 5 nanoliter range, which isn’t huge but also isn’t trivial,” he said. “I was curious about why we’re still finding them.”
While his analysis of the latest water samples did not detect the compounds at some sites, like the Narrow River and several rural locations, concentrations were high in some samples collected from northern Rhode Island and in Warwick. Lohmann said all of the samples with high concentrations of perfluorinated compounds were associated with airports, textile mills, wastewater treatment facilities, and industrial metal plating operations, the latter of which use solvents containing the compounds.
The samples from New Jersey all contained low levels of the chemicals.
“That was a big surprise to us, because most of the time, Narragansett Bay is a fairly clean water body. Normally when we compare it to the Passaic River, we’re cleaner by an order of magnitude or two. But not in this case,” Lohmann said.
The EPA has set a maximum threshold for perfluorinated compounds of 70 nanograms per liter in drinking water. And while none of the Rhode Island sites exceeded that value – the highest was 47 near T.F. Green Airport – Lohmann said that many states and countries have set lower limits, and several of his colleagues think that “70 is far too high” to be safe.
The concern is that exposure to the compounds, especially high exposure over long periods of time, can lead to several kinds of cancer. Epidemiology studies suggest that exposure can also lead to immune system deficiencies and contribute to obesity via a decline in liver function.
The good news, according to Lohmann, is that since the compounds were not detected in several samples, then “clearly you can get to almost zero. It means that Rhode Island has a number of point sources that potentially could be targeted for reduction,” he said. “If DEM wanted to, they could probably identify where those compounds are coming from and maybe try to reduce their emissions. That would be a good thing for the bay.”

This article first appeared in EcoRI.org on October 7, 2016.

Posted by Todd McLeish at 8:54 AM No comments: