Ancient and Exaggerated: Narwhals through History 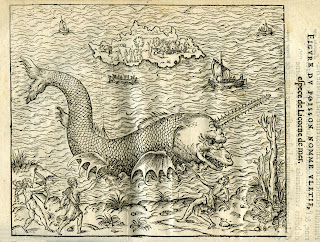 A while back I spent several days at the New Bedford Whaling Museum research library, where I uncovered some of the earliest known writings about narwhals. And last week I finally received some scanned images from the librarian of what early explorers believed narwhals looked like. The oldest volumes, like those by Swedish writer Olaus Magnus in 1555 and naturalist Konrad Gesner in 1558, written entirely in Latin, included woodcut prints illustrating what they identified as Monocerote or Monocerotis, an early variation on today’s taxonomical identifier, Monodon monoceros.  Next to an illustration of a sawfish – which several authors apparently believed were closely related to narwhals – Magnus showed a fish-like creature with a short, thick horn emerging from its forehead. He described it as “a sea-monster that has in its brow a very large horn wherewith it can pierce and wreck vessels and destroy many men.” Gesner’s narwhal, depicted with just its head emerging from the water, looked more like an alligator, with a long snout and abundant teeth, large dog-like eyes and, like Magnus, a horn sticking straight up from the top of its head. 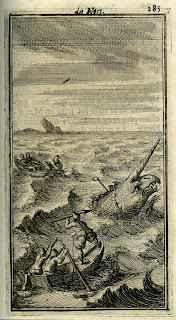 Surgeon Ambrose Paré, in 1582, writing in French about unicorns, described a sea unicorn “with a horn on his forehead like a saw, three feet long and a half, and four inches wide, with its two peaks very acute.”  The accompanying lithographic illustration featured a monstrous creature labeled Vletif with a long, scaly body, a mermaid tail, two pairs of pectoral fins that looked to me like dragon wings, a wolf-like face and teeth, and a horn like the rostrum of a sawfish rising from the top of its head. It exhibited an angry look as hunters poked at it from land while whaling ships sailed by in the distance. Theologian Isaac de La Peyrère in Relation du Groenland (1663) includes three excellent views of a narwhal skull alongside an illustration of a narwhal looking more like a fish than a whale but with a bear-like snout and its tusk growing from its nose. It is clear that he had access to narwhal skulls and tusks from which to create accurate illustrations, but he had not been able to study complete narwhal specimens and were instead left to interpret brief sightings of the animals in the water.
In 1700, ship’s surgeon Pierre Martin de la Martiniére published observations from an Arctic expedition in A New Voyage to the North, which includes an extraordinarily unique depiction of a narwhal hunt that the Whaling Museum’s librarian said “has no precedent.”  Yet it is the image of the narwhal that was most disturbing to me: a scaly body, a hawk-like beak and eyes, and a spiral tusk emerging from its forehead, with its head the size of a rowboat
Not long afterward, descriptions and illustrations of narwhals finally became more and more true to life. Explorer Henry Ellis’s A Voyage to Hudson’s-Bay (1748) was the first I found to correctly illustrate the tail of a narwhal as a horizontal fluke as opposed to the vertical caudal fin of a fish tail that most earlier illustrations feature. Bernard O’Reilly’s written description of narwhals in Greenland, the Adjacent Seas, and the Northwest Passage to the Pacific Ocean (1818) is much more accurate in its physical descriptions and behaviors than most earlier works, though critics claim most of his book is fiction. He must have had a specimen available to him, as he included such details as its tongue length and placement in the mouth (“very short, immoveable, and placed very far behind”), the size of the throat passage to its stomach (“very small, not three inches over”), and its mouth size (“very small; its greatest expansion being not more than six inches”).
While descriptions of what narwhals look like were getting more accurate, descriptions of narwhal behavior remained just exaggerated guesses. For instance, William Henry Dewhurst, a surgeon on an English whaling ship, wrote in The Natural History of the Order of Cetacea and the Oceanic Inhabitants of the Arctic Region (1834) that the narwhal “is an animal possessing almost colossal strength, inasmuch as it precipitates itself upon every thing giving it the least offense, and furiously rushes against the most trifling obstacle.  Its habitual sojourn is among the ice and icebergs of the Arctic Seas.  Here, in the vast empire of eternal frost, where darkness reigns for so great a portion of the year, this giant of the frozen ocean dares every power, braves every danger; and bent upon carnage, he attacks without provocation, combats without rivalry, destroying without necessity; and the only enemy to whom he is occasionally compelled to yield to, is man.”

Legendary author Jules Verne continued these exaggerations in his 1870 classic Twenty Thousand Leagues Under the Sea.  His main character, Captain Nemo, a marine biologist, said:  “The ordinary narwhal, or unicorn fish, is a kind of whale which grows to a length of sixty feet… [It] is armed with a kind of ivory sword, or halberd, as some naturalists put it.  It is a tusk as hard as steel. Occasionally these tusks are found embedded in the bodies of other kinds of whales, against which the narwhal always wins.  Others have been removed, not without difficulty, from the hulls of ships which they had pierced clean through as easily as a drill pierces a barrel.”
The truth about the narwhal’s abilities, from its flexible tusk to its extraordinary diving abilities, is far more extraordinary than Verne’s fiction.
Posted by Todd McLeish at 9:02 AM 2 comments: