Plants are more aware than we think

It has taken a long time, but scientists are finally coming to the realization that humans aren’t as unique and superior as was once thought. Yes, our big brains make us the most intelligent creatures around, but we’re not the only animals to use tools, communicate complex ideas, solve problems, make conscious decisions, or even show emotion.

But what about plants? The blooming daffodils and spring ephemerals that are blooming this month have got me thinking about what talents plants may possess that few of us recognize. They don’t have a brain, so they cannot think, and yet many plants exhibit remarkable abilities to sense and react to the world around them.
We know, for example, that plants don’t have ears, but that doesn’t mean they can’t hear – which may be a comfort to those who talk to their plants or play the radio all day to keep them entertained. In one study, scientists played a recording of a caterpillar eating leaves, and nearby plants responded by secreting chemicals they use as a defense against caterpillars. There were no caterpillars present, just the sound of caterpillars eating, so clearly the plants could hear it.
Similarly, Australian researchers played the sound of water trickling through a pipe, and the roots of nearby plants grew toward the sound of the water. Again, no actual water was trickling, and yet the plants detected the sound, recognized it was a useful resource, and reacted appropriately by extending their roots toward the faux water.
Hearing is only one of the many senses that plants exhibit. Some researchers claim that they may have even more senses than people do.
We’ve all seen how house plants begin to lean toward the light from the nearest window, but have you ever considered that to be a form of vision or eyesight? They detect the direction the light is coming from and grow toward it. They also know when another plant has grown over them, blocking their sunlight. And some can even detect different colors of light.
Venus flytraps are the obvious example of a plant that has a sense of touch. As soon as a bug flies into its open trap and touches at least two hairs growing inside the lobe of the trap, the trap springs closed to capture and consume the insect. The plant can feel the prey touching the hairs and responds effectively.
Plants can smell other plants, too. In many fruit trees, for instance, the smell of ripening fruit will induce nearby fruit to ripen more rapidly. They can also remember, sense up from down, and avoid obstacles.
This is not to say, as University of Rhode Island botanist Keith Killingbeck warns, that plants that communicate are “old friends” or they “look out for one another.” That’s just anthropomorphism – giving human characteristics to non-human entities. "The novel research that has revealed the intricacies of plant abilities is captivating enough without the need to put an emotional smiley face on an oak tree," Killingbeck said.
And while no one is claiming – yet – that plants have human-like intelligence or can feel pain, we do have much more in common with grasses and wildflowers and maple trees than most of us would have imagined a few short years ago.
So next time you think you’re alone in the woods, think again. The plants may be watching you.

This article first appeared in The Independent on April 19, 2018.

Posted by Todd McLeish at 5:00 PM No comments:

On one side of a large greenhouse behind the Bristol County Agricultural High School in Dighton, Mass., are a dozen shallow plastic tubs, each containing a few inches of water, some artificial vegetation and several rare Blanding’s turtles. A similar line-up of tubs – but with much less water – contain equally rare wood turtles. And four 60-gallon pools hold federally endangered Plymouth red-bellied cooters.

All of the turtles are less than a year old, and all are part of research projects designed to boost the populations of the turtles by raising hatchlings in captivity for their first year until   they are less vulnerable to predation. After a year in captivity, the animals are returned to the wild.
The effort is called “head-starting” the turtles. The Massachusetts Division of Fisheries and Wildlife has been head-starting cooters since 1984 by collecting hatchlings at the few ponds where they live in Plymouth County – the only place they are found – and having them raised at science centers around the state. Students at Bristol Aggie got involved six years ago, and this year they are raising 66 cooters in a partnership with Mass Wildlife and the U.S. Fish and Wildlife Service.
“They’re easy to raise, so it’s gone very well,” said Brian Bastarache, a teacher in the school’s Natural Resource Management program. “We have some issues with a shell infection this year that we haven’t had to deal with before, but it’s a disease only found in captive turtles, and we expect it will clear up once they’re released.”
Head-starting of young turtles has a somewhat controversial history, according to Bastarache, so the Blanding’s turtle project is designed to put the controversy to rest.
“Some biologists have concerns that head-starting sounds good in principle but isn’t effective in reality,” he said. “This Blanding’s experiment is to determine if it does improve 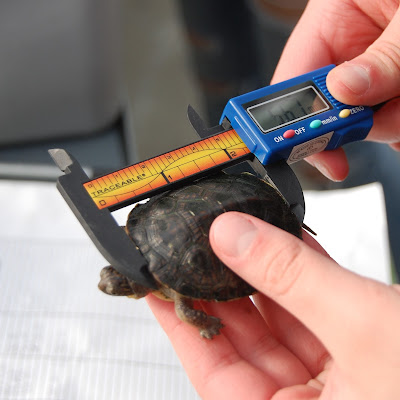 population recruitment, as opposed to just making us feel good that we’re doing something. What’s different with this project is that the turtles will have an intensive post-release monitoring, and the larger ones will get a radio transmitter so they can be tracked.”

Blanding’s turtles are quite rare throughout most of their range in the central and eastern United States and Canada due to habitat fragmentation and nest predation. They are unusual in that they show no signs of aging and can remain active, healthy and continue to reproduce for more than 80 years, assuming they reach maturity. The head-start program aims to help them do so.
During a tour of the Bristol Aggie head-start facility, about 20 sophomore students were attending the Blanding’s turtles – weighing and measuring each one and sorting them by size.
“They’re very slow growing, so you don’t really notice their growth until you look at the data,” said student Wyatt Rego of Swansea. “They have different growth rates based on their metabolism and competition for food, so we sort them by size so the smaller ones aren’t competing for food with the big ones.”
Rego said that the turtle project is one reason he enrolled at Bristol Aggie.
“You’re actually doing something, not just being in school and learning,” he said. “We’re actually helping in a government program to get something done.”
Fellow student Abigail Bruno agrees. “I’ve always had a love for nature and natural resources, so getting into this program was a natural thing,” said the Rehoboth resident. “I’ve always been interested in turtles – I have a pet tortoise at home – and I like the idea of helping out endangered species.”
Bastarache said the project not only teaches his students how to care for and study rare turtles by following strict scientific and safety protocols, they also learn to work independently and as teams.
“They all really want to be here,” he said. “They’re learning project management, communication with team members, and the ability to assess a problem and take actions to address it. This time of year, I stand in the corner and let them run the show so they can develop those professional and survival skills. They’re also learning how to apply computer skills and math skills.”
Nine years into a ten-year study of the head-starting of Blanding’s turtles has already shown that the effort is worthwhile. Survivorship of the turtles that spend their first year in captivity and safe from predators is much greater than those that spend that first year in the wild. A detailed analysis of the project’s results will be completed after the final year of the project in 2019.
In May, the one-year-old Blanding’s turtles raised at Bristol Aggie will be released at the Assabet River National Wildlife Refuge in Sudbury, Mass., and Bastarache’s students will be there to wish the animals well.
While the turtle project will continue with a new batch of hatchlings next year, Bristol Aggie will launch a new partnership with Roger Williams Park Zoo next year in which the students will also raise rare New England cottontails for release throughout the region.
This article first appeared on EcoRI on April 12, 2018.

Posted by Todd McLeish at 7:32 AM No comments: