News from the Journal of Commerce this week indicates that about 350 cargo containers slip from transport ships into the ocean every year, and that number nearly doubles to 675 if a ship loses multiple containers at once.  It’s a much smaller number than the 10,000 containers per year that had been circulated for years, but still a worrisome figure.  It’s just one source of the abundance of trash in the world’s oceans and a continuing source of concern for the health of marine life, especially whales. 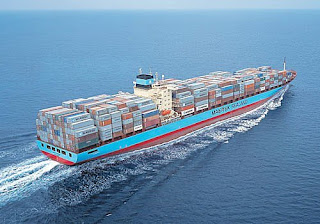 Until recently, Arctic marine life hasn’t had to worry much about massive ships traveling through its habitat and affecting its behavior.  But the retreating sea ice and the expected opening of the Northwest Passage is soon going to change that, as will the increasing efforts to explore and drill for oil and other minerals that previously had been inaccessible due to the ice.
According to The Wall Street Journal, the U.S. Geological Survey believes that there may be as many as 50 billion barrels of oil off the coast of Greenland, a quantity similar to that of Libya, which could provide an economic boost that would transform the island and sever its financial dependence on Denmark.  The expense of drilling in the region, along with the short drilling season and the risks that oil rigs would get rammed by icebergs, had made oil drilling in the region unattractive.  But increasing oil prices, satellite tracking of icebergs, and warming temperatures have created a huge opportunity and growing interest among oil companies around the world.
The political wrangling over what country controls the rights to oil and gas and other minerals at the North Pole, including the bizarre effort by two Russian submersibles to stake aclaim to the area by placing that country’s flag on the seafloor at the pole, is a testament to the great potential wealth to be found there.  In 2010, a British company drilled the first exploratory oil wells off Greenland in more than a decade, and the same year the government awarded more than a dozen new exploration licenses to companies from several nations.
These developments are alarming to a number of groups, including those concerned about the health of narwhal populations.  Narwhals are skittish and the noise and increased shipping resulting from increased industrial activity is certain to be a significant disturbance to their feeding, migration and communication, to say nothing of the threat of oil spills, which could be devastating.
Representatives of the fishing industry in Greenland have also publicly expressed their concerns about the effect that oil exploration will have on commercial fishing, though some narwhal biologists worry about the fishermen, too.  It is predicted that the loss of sea ice will open up additional areas for expanded fishing for halibut, the primary prey of narwhals and a species with snow-white meat that is high in fat and reportedly rich in flavor, making it popular for sushi, sashimi and smoking.  It’s a worrisome possibility, especially considering that when commercial interests compete against wildlife for a resource, the animals almost always lose.
Narwhals have a very restricted diet, with Greenland halibut being their predominant prey.  Halibut are widely distributed in the North Atlantic, and commercial fishermen traditionally harvested about 20,000 tons per year in the fjords of northwest Greenland using long-lines and gillnets.  An additional offshore fishery developed in the 1990s in Davis Strait that now captures more than 10,000 tons of halibut each year, and efforts are underway to open up additional fishing grounds in the deep waters of central Baffin Bay, where most narwhals do the majority of their feeding. The more the ice recedes, the more fishing is likely to take place, leaving fewer and fewer resources for the narwhals and adding to the increasing headaches the whales will face from the industrialization of Arctic waters.
Posted by Todd McLeish at 4:08 PM 2 comments: