“A rapid increase in shipping in the formerly ice-choked waterways of the Arctic poses a significant increase in risk to the region’s marine mammals and the local communities that rely on them for food security and cultural identity.”  That’s the conclusion drawn by a group of Alaska native groups and the Wildlife Conservation Society following a workshop last week.
Before the climate started warming, sea ice had been a major obstacle to large ships traveling in the high Arctic, but that is less and less of an issue for the ships, and more and more of an issue for marine life. 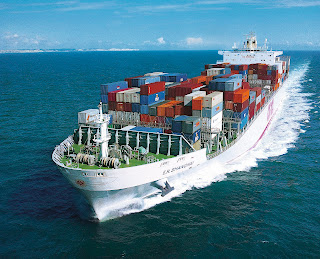 “The disappearance of summer sea ice from the region’s coastal areas is leading to major changes in this part of the world,” said Martin Robards, director of the Wildlife Conservation Society’s Beringia Program. “The presence of large ocean-going vessels is expected to increase as the region becomes more attractive to both international shipping and extractive industries seeking minerals, oil, and gas. The northern sea route is 30 percent shorter than the comparable route linking northern Europe to Asia via the Suez Canal, which only supports the conclusion that the Bering Strait is likely to get busier.”
While this workshop and its conclusions focus on the marine mammals in the Bering Sea and the waters around Alaska – a region that is far from the range of the narwhal – it is just as true for the eastern Canadian Arctic and the waters around Greenland where narwhals will be similarly affected.
One strategy suggested by the workshops participants for combatting the effects of increased shipping was to enforce a reduced speed for shipping through the Arctic region. The strategy has been successful in reducing ship collisions with the imperiled North Atlantic right whale along the U.S. East Coast, and it is worth trying in the North as well.
But ship strikes are primarily an issue for larger whales like bowheads.  Narwhals are more likely to be affected by the low-frequency noises that the ships emit. The sea unicorn is skittish and the noise from increased shipping is certain to be a significant disturbance to their feeding, migration and communication.
“There is mounting evidence that human-generated sounds in the marine environment have negative effects on marine life,” said Howard Rosenbaum, director of The Wildlife Conservation Society’s Ocean Giants Program. “An increase in background noise from increased shipping, coupled with increases in underwater noise from industrial activities and other potential stressors, is of great concern for the Arctic’s marine species and their important habitats.”
An even greater threat comes from increased oil exploration and the likelihood of an oil spill in a region with little or no capacity to contain it.  As I wrote here last year, the U.S. Geological Survey believes that there may be as many as 50 billion barrels of oil off the coast of Greenland, a quantity similar to that of Libya, which could provide an economic boost that would transform the island and sever its financial dependence on Denmark.  The expense of drilling in the region, along with the short drilling season and the risks that oil rigs would get rammed by icebergs, had made oil drilling in the region unattractive.  But increasing oil prices, satellite tracking of icebergs, and warming temperatures have created a huge opportunity and growing interest among oil companies around the world.
“The lack of international response capability to a spill in these waters is a serious concern in light of the increased interest in oil and gas exploration, or the rise in transportation of petroleum products by tankers through the Arctic,” added Robards. “A comprehensive approach is clearly needed to prepare for a potential environmental disaster in a region where marine mammals transit both national and international waters.”
Hopefully the concerns raised at the Alaska workshop will be heard by U.S. policymakers and the Coast Guard and shared with their counterparts in Canada and Greenland.  Arctic marine life will have plenty to deal with from the warming climate without having to also defend themselves from a flotilla of noisy ships.
Posted by Todd McLeish at 10:22 AM 2 comments: