What preys on narwhals?

About twice a week for the last three months I have been giving public presentations about narwhals to a wide variety of community groups to promote my book, Narwhals: Arctic Whales in a Melting World. I never get tired of sharing stories about my adventures studying narwhals in the High Arctic and shedding light on their natural history and the threats they face.  Once of the most common questions I am asked relates to the predators that prey upon narwhals.
It is sometimes difficult to imagine that any animal could attack and kill a whale – even a small whale like a narwhal – but hardly any species is invulnerable. Human hunters certainly cause considerable mortality on narwhals, though quotas are enforced and hunters are closely monitored to ensure that narwhal populations do not decline due to hunting.
The primary natural predators on narwhals are killer whales, which are virtually absent from the winter range of the narwhal, when the sea unicorn lives near the edge of the ice pack in habitat that is 97 percent covered in ice. When that ice retreats and the narwhals follow it northward, killer whales do, too, where scientists estimate they may kill 200-300 narwhals during the two or three months of open water.
“My general feeling,” said University of Washington biologist Kristin Laidre, “is that the densities of killer whales in the Arctic are low. Sightings of killer whales are, in general, pretty rare. We do know that they feed on narwhals and belugas, and some killer whale pods, it seems, have evolved to know precisely where narwhals are located in summer, especially in the southern part of their range like in Foxe Basin or Hudson Bay. There they show up pretty regularly, as narwhals are a predictable prey resource that occur in high densities in ice-free shallow waters.” Killer whales are sighted only rarely along the coast of West Greenland, she added, where many narwhals also spend the summer. 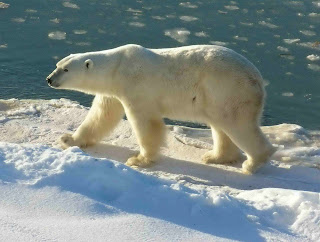 But orcas aren’t the only narwhal predators.  Greenland sharks are known to occasionally feed on narwhals as well. Just days before my arrival at a narwhal hunting camp near Qaanaaq, Greenland, several Greenland sharks were killed by native hunters as the sharks attempted to feed upon a narwhal that had been harpooned and was being transported to shore by the hunters. No one knows with any confidence how many narwhals are killed by sharks, but the number isn’t believed to be large.
Polar bears, too, have been known to feed upon narwhals, but this probably occurs infrequently and only in certain circumstances. During the icy winter season when narwhals surface to breathe in narrow cracks in the sea ice, polar bears sometimes stake out these openings and wait for narwhals to surface. The bears have been observed to leap onto the back of the whales, dig their claws in and bite at the narwhal’s blowhole, perhaps in an effort to suffocate the whale. One of the whales captured by the Canadian narwhal research team I spent time with in 2010 had the characteristic scratch marks on its flanks and bite marks around its blowhole that indicate a polar bear attack, but clearly that whale survived, probably by diving deeply and forcing the bear to release it.
These aren’t the only threats that narwhals face, as was noted this week by blogger Isabelle Groc, who visited with the same narwhal research team last year. Climate change and a host of other anthropogenic factors probably will have a greater effect on the whales in the years to come. But in answer to my frequent questioners, it is killer whales, Greenland sharks and polar bears that narwhals have had to steer clear of for many millennia.

The ice entrapment of 11 killer whales last week generated international media attention and raised concerns about the increasing frequency of such events and how best to address them.  It appears that a shift in wind and ice enabled the whales to escape this time, changing what could have been a horrifying story into a somewhat heartwarming one. But that is likely the exception to the rule.
As I wrote last winter when dozens of beluga whales became entrapped by closing ice in the Bering Sea near Russia, ice entrapments of large numbers of whales has been infrequent through the years, though the Arctic is so thinly populated that no one is around to observe or document entrapments in the vast majority of the region.  When 600 narwhals were entrapped off Baffin Island in Nunavut in 2008, local Inuit hunters said the last entrapment they recalled occurred way back in 1943.  But there are fears that climate change is increasing its frequency.
Narwhal biologist Kristin Laidre at the University of Washington told me that four ice entrapments that resulted in the deaths of more than 700 narwhals occurred in 2008 and 2009 – the first one ever documented in East Greenland, as well as two in northwest Greenland and the very large one near Pond inlet.
Laidre is beginning to examine the distribution and timing of known ice entrapments and look at the trends in the breakup of sea ice on the narwhal’s summering grounds. She has found what she calls “strongly significant trends” that suggest that the ice is forming later and later.  “Over a 30 year period there is a three to four week difference in when the ice forms,” she said.  “If ice formation is a clue to the narwhals that it’s time to get out of their summering grounds, then the trigger is changing, the pattern is changing.”
Is that change in the formation of ice making narwhals more vulnerable to ice entrapments?  Laidre hypothesizes that it may be the case, though there is precious little data from which to draw conclusions just yet.  But the hints she has found so far are another indication of the dangerous implications of global warming.
Posted by Todd McLeish at 9:01 AM No comments:

Narwhals are in the news again, but this time they’re on the crime pages, as two Americans and two Canadians have been arrested for what government officials call a decade-long narwhal tusk smuggling operation.  As was reported in many Canadian news outlets,


“Gregory and Nina Logan of Grande Prairie, Alta., are facing 28 charges in New Brunswick in connection with the alleged export of the tusks of the narwhal, a threatened Arctic whale, to customers in the U.S. — a violation of Canadian and American laws shaped by CITES, an international treaty that regulates the commercial trade in animal parts of vulnerable species.


“And in December, the U.S. Department of Justice unsealed an indictment alleging that two unnamed Canadians and two U.S. citizens — Andrew Zarauskas of Union, N.J., and Jay Conrad of Lakeland, Tenn. — conspired for close to a decade to transport the valuable whale tusks to U.S. buyers via the Milltown border crossing between St. Stephen, N.B., and Calais, Maine.”

I have written about several other cases of illegal sales of narwhal tusks, including a Massachusetts antiques dealer who is now in prison for trafficking in tusks and sperm whale teeth and another instance of a New Mexico woman who was caught with seven illegally-obtained tusks.  But this latest case appears to have involved much more than quietly selling artifacts in an antique store.  This one was a professional smuggling operation that featured the use of a utility trailer modified to conceal the tusks from customs inspections at border crossings.

Illegal tusk sales and smuggling continue to be a problem in Canada and the United States, and the Canadian government has struggled to come up with a plan agreeable to the local narwhal hunting communities to reduce it.  Federal regulators have proposed what the National Post described as “a tagging system aimed at easing the tracking of individual tusks by placing a permanent identification label on each object. Inuit stakeholders initially expressed concern that the proposed tagging method could devalue tusks, and negotiations on that issue were expected to yield a new tracking system early this year.”  Officials want to implement the new rules, along with a new quota system for hunting narwhals, before the March CITES meeting in Thailand, which could see the U.S. and other countries pushing for a global ban on selling tusks.  Currently, tusks can be sold legally from Canada to many other nations, but the U.S. Marine Mammal Protection Act prohibits their transport into the U.S., where collectors will pay as much as $10,000 for high quality tusks.
In 2010, the Canada Department of Fisheries and Oceans placed a ban on any export of narwhal tusks from Canada, citing concerns about the affect of climate change on narwhal populations and the officials’ inability to state that narwhal hunting would not have a further detrimental effect on the health of narwhal populations. That ban was lifted in 2012.
As I wrote in this blog two years ago, much as I would like to own a tusk and display it on my living room wall as a remarkable object of natural history, I also don’t want to be part of the reason that narwhal numbers decline in the future.  Biologist Kerry Finley told me that as soon as you start putting a price tag on wild animal parts – whether it’s meat, antlers, tusks, gall bladders, or any other part – you put animal populations in jeopardy. That’s something we all should avoid.  In the end, I hope we all can agree that a healthy narwhal population is much more important than having another artifact on our mantle.
Posted by Todd McLeish at 10:11 AM 2 comments: