Strategies for staving off the winter chill

When the cold weather of winter arrives, Rhode Islanders have the same three choices that wildlife have – they can migrate south to avoid the cold, continue their lives as usual and do their best to ignore the cold, or stay inside and hibernate for the winter.
In the animal world, the nectar- and insect-eating birds choose the first option, migrating sometimes great distances to wherever their preferred flowers or insect prey remain active and available. Like skiers and snowboarders, option two is the choice of coyotes, foxes, weasels and other hardy mammals, who tough it out through the cold months and may even benefit from the challenging conditions.
While most Rhode Islanders probably choose to avoid as much outdoor activity as possible during the winter, preferring instead to hibernate in their well-heated homes, few animals in our area make that choice. Woodchucks and some types of bats may be the only species to undergo the physiologically challenging process of hibernation. 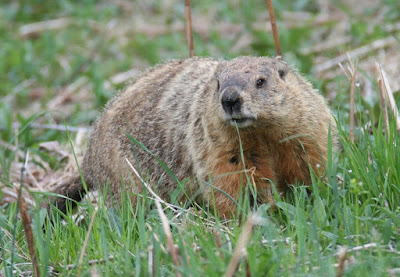 According to wildlife biologist Pete August, a professor at the University of Rhode Island, hibernation is a state of inactivity that, unlike sleeping, involves a dramatic reduction in body temperature, a slowing of the metabolism, a reduced heart rate and slowed breathing.
“When a true hibernator goes down, they shut their body down for the season,” August said. “It isn’t remotely connected to being asleep.”
Successful hibernation requires lengthy preparation. Animals begin by putting on excess fat to provide them with enough energy to sustain them through the winter months.
I typically achieve this by hoarding sweets and leftovers following Thanksgiving and Christmas dinner. But most hibernating animals pack on the calories throughout the fall before entering their winter dens. Some smaller animals like chipmunks, which enter a reduced hibernation state called torpor that they awaken from periodically during the winter, cache large quantities of food in their burrows during autumn so they can nibble on it when they awaken.
While taking a three or four month nap may sound appealing, hibernation is not without its risks. If an animal hasn’t put on enough fat to last the winter, they may wake up too soon, which raises their metabolism and body temperature and speeds up the depletion of their fat reserves before additional food becomes available. It usually has tragic results.
That’s similar to what has caused millions of bats to die around the eastern U.S. in the last decade. An invasive fungus in the caves where they hibernate causes white nose syndrome, a disease that arouses the bats from their hibernation too soon. With no insects to prey upon in the middle of winter, the bats quickly use up their energy reserves and die of starvation.
Although true hibernation only occurs in mammals, other local creatures exhibit somewhat similar behaviors to survive the winter cold. Wood frogs, for instance, hide in the leaf litter and nearly freeze solid without any negative physiological effects. Painted turtles burrow into the mud at the bottom of a pond, surviving for long periods without oxygen. And garter snakes gather in massive aggregations – sometimes numbering in the thousands – in underground burrows, where they remain alert but quite sluggish.
Whatever your chosen strategy for outlasting the winter, be happy that at least you get to spend most of it indoors. With the exception of a few mice in my house, Rhode Island’s wildlife doesn’t have that option.

This article first appeared in the Independent on January 19, 2017

Posted by Todd McLeish at 2:13 PM No comments:

The observation of a greylag goose in Watchemoket Cove in East Providence has birdwatchers rushing to the pond adjacent to the Metacomet Country Club to try to catch a glimpse of the rare species. But it has also caused an intense debate over whether it’s a wild bird and, therefore, one that birders can add to their Rhode Island bird list.
Tan and white birds with an orange beak and legs, wild greylag geese have only been recorded in the United States a handful of times, including one record from Connecticut in 2009. As a result, the small parking lot on Veterans Memorial Parkway is often full as local bird enthusiasts search for the goose or wait for it to arrive for its near-daily visits to the site.
Native to Europe and Asia, the species has been domesticated and is sometimes found on farms and in aviary collections. These birds occasionally escape captivity and take up with their wild cousins, like the large flocks of Canada geese with which the East Providence bird has been traveling.
The debate over whether the local goose, which was first reported on December 20, is wild or domestic will eventually be settled by the Rhode Island Avian Records Committee, but in the meantime, there is much discussion taking place online about its origin.
On the Facebook group Rhode Island Birders, Andy Boyce argued that there has been an increasing and well-documented pattern of geese that breed in Greenland – greylags breed in nearby Iceland – showing up on the northern coast of North America in the late fall and winter. “This pattern is totally plausible given what we know about errors that birds make during migration,” he wrote, noting recent New England records of barnacle geese and pink-footed geese, which breed in eastern Greenland. “There are very few accepted records of greylag goose…[but] this certainly looks like a good one. Go out and see it!”
Dan Berard, vice president of the Ocean State Bird Club, responded with a 1,000-word treatise acknowledging Boyce’s arguments and pointing out that the East Providence bird looks “superficially” like a wild bird and it does not have a band around its leg, which many domestic birds do. But he also wrote that New England appears to have more escaped domestic waterfowl than other regions, and greylag geese are less prone to wandering out of their normal range than other geese.
“To me,” he concluded, “nothing so far proves this to be more than a potential vagrant greylag, and due to the ingrained migratory patterns, it is incredibly unlikely.”
The process of deciding whether the bird is wild or domesticated can be a lengthy one. It took five years for the Avian Records Committee of Connecticut to issue a decision about the greylag observed there.
The Rhode Island Avian Records Committee – whose members are Robert Emerson, Rachel Farrell, Richard Ferren, Shai Mitra, Chris Raithel, Scott Tsagarakis and Doug Wilson – will gather photographs of the bird and send them to experts in Europe who observe the birds regularly.
“The question will be the bird’s provenance,” said Farrell. “We will never be able to tell exactly where it came from. Unless someone gets a DNA sample, we’ll never know that answer. But we’ll have to look at a lot of the circumstances -- where is it hanging out, what type of birds is it with. There’s a lot of work to do.”
The committee will also contact all of the known waterfowl collectors in the region to see if they lost a greylag. Farrell said that many of the collectors are often not particularly forthcoming with that information.
Rhode Island often has wild geese from other parts of the world turn up in the winter. Canada geese are common year round, and good numbers of brant – a smaller and darker species that prefers coastal waters – spend the winter in the state. A few snow geese, white birds with black wingtips, stop in the state every year as they migrate from Canada to the Mid-Atlantic States. And birders occasionally report a cackling goose, Ross’s goose or greater white-fronted goose, all western species that often wander far from their usual range. In the winter of 2007, seven species of geese could be observed on Aquidneck Island on a single day, including three pink-footed geese and a barnacle goose.

This article first appeared on EcoRI.org on January 4, 2017.

Posted by Todd McLeish at 3:18 PM No comments: