Rhode Island gardeners in Cranston and Barrington are joining a national effort to install native plants in their gardens. The idea behind the effort is to link their yards with native habitat on protected lands and create what organizers are calling “pollinator pathways” to boost populations of bees, butterflies, birds and other wildlife.
In the Edgewood section of Cranston, Suzanne Borstein is leading the effort to get her neighbors and friends to plant native plants in what she calls the “tree lawn” — the area between the sidewalk and the road. Since last November, she has hosted a series of online meetings to discuss the initiative, and nearly three dozen Cranston households had agreed to participate by the beginning of May, with more signing on every week.
“The connectability of the garden spaces is what’s especially important,” Borstein said. “If you have a great yard but nobody else in the neighborhood does, then the pollinators won’t be attracted or sustained.”
Planting native plants and restoring native habitat is vital to preserving biodiversity, according to 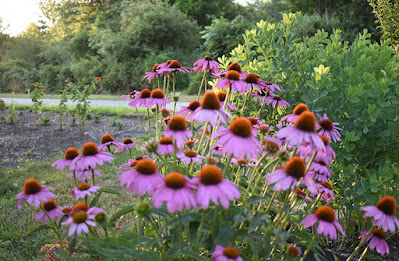 the National Audubon Society. The habitat created by native plant gardens helps to nurture and sustain insects, birds and other creatures.
The idea for the Pollinator Pathways program emerged from a popular book written by University of Delaware entomologist Doug Tallamy called Bringing Nature Home. According to Borstein, Tallamy’s idea was to get people to replace half of their lawns with native plants that would support native insect populations, which in turn support bird populations. If enough people participated, the pollinator pathways would link properties that, when combined, would total more acreage than all of the country’s national parks.
Borstein, a clinical psychologist, said the goal of her effort is to “raise awareness of the importance of choosing native plants. I’m making it as local as I can so we can build community, neighbor to neighbor. I want to increase the availability and use of native plants.”
But where to buy native plants for local use is a considerable problem.
“There’s a new awakening that we should plant natives, but native plants are hard to find,” said Sally Johnson, vice president of the Rhode Island Wild Plant Society board of directors. “I don’t think the commercial market has responded yet to the need.”
The Rhody Native program, launched by the Rhode Island Natural History Survey in 2009, was initially successful at growing native plants from seeds collected locally, but it couldn’t be sustained by a nonprofit with limited staff and funding.
When Borstein contacted Johnson for help in sourcing native plants for her Edgewood gardeners, Johnson eventually identified about 10 native plant species that could be acquired from a commercial nursery in New Jersey.
“It’s called the Garden State for a reason,” Johnson said.
The Barrington Land Conservation Trust is also finding it difficult to find native plants for participants in its pollinator effort.
“Many local nurseries carry plants listed as native, but native to where? New England? The Midwest? Are they true natives or cultivars?” asked Cindy Pierce, one of the organizers of the Barrington project. “It can be daunting for a new gardener or even an experienced gardener new to natives.”
Pierce noted Blue Moon Farm Perennials in South Kingstown specializes in native plants, but the Barrington group is also working with the Rhode Island Wild Plant Society to acquire native plants. The Land Conservation Trust is also asking local nurseries to stock natives, and it plans to hold its own native plant sale in the fall.
The Barrington gardeners aren’t just focusing their efforts on planting natives in the tree lawn, however. They are instead encouraging their neighbors to take whatever steps they can to diversify their gardens with native plants.
“Whether it’s adding a few container plants, adding native plants to an existing garden, or creating a meadow,” Pierce said. “Eliminating the use of fertilizers and lawn chemicals is another important step everyone can take, along with reducing the size of your lawn, mowing less often and leaving the leaves in your garden. Every little bit helps.”
Assuming that interest in native plants and the Pollinator Pathways program continues to build, organizers in Barrington and Cranston hope additional communities will join and extend the corridors being built for pollinators. Those that add native plants to their gardens can add their properties to an online map of native plant gardens called Homegrown National Parks that author Tallamy has established.
“Even if you only have three feet of natives, you can get on the map and it hooks you up to a lot of resources,” Borstein said.
After the planting season, Borstein hopes to organize a neighborhood walk so residents can “see what’s possible.” She hopes such an event will lead to additional participants and further discussions about expanding the project.
“I don’t have anything formal planned, but I’d like to create some way that all of the other organizations in Rhode Island could communicate to share information,” Borstein said. “And I’d like to see it grow beyond pollinators and help people to understand the role of shrubs and trees as well. It will help gardeners understand more about the issues from a holistic point of view.”
This article first appeared in EcoRI.org on May 27, 2021.
Posted by Todd McLeish at 9:30 AM